ONGC - Pride Award for ‘Excellence in the Oil & Gas sector ’

ONGC bagged the India's  Pride Award for ‘Excellence in the Oil & Gas sector ’ at a glittering  awards ceremony held at Hotel Ashok, New Delhi on 27 March 2017. Minister of State for Railways, Mr. Manoj  Sinha gave away the eminent award to Director (HR),  ONGC, Mr. D. D Misra, who  received it on behalf of the organization.

The Hon’ble Union Cabinet  Minister for Minister for Road Transport and Highways and Shipping Mr. Nitin  Gadhari , also joined occasion later and congratulated the winners for  excelling in their fields.This is the 8th Edition of Dainik Bhaskar India Pride Awards with ONGC consistently bagging the niche  accolade from past several years. 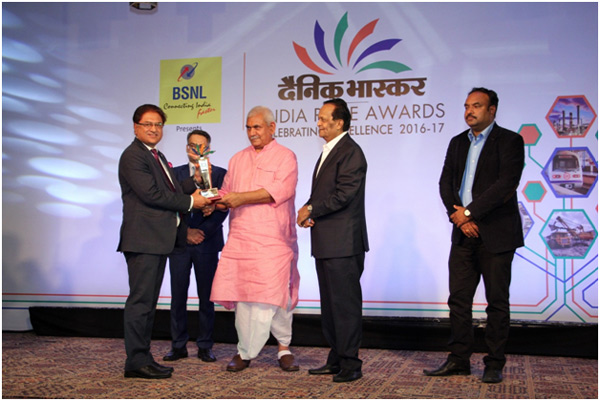 The  awards evening which was marked by the presence of the who's who of the  country's public sector universe, both central and state, key corporate players  from the private sector and senior bureaucrats served as an important platform  to proffer much-deserved acknowledgement of the remarkable service rendered by  the public sector and its invaluable contributions to creating the foundations  of the nation's economy.

In 2009,  on completing 50 years in business, Dainik Bhaskar Group had instituted the  first ever ‘India Pride Awards’ to honor the PSUs of  India in their areas of excellence. The award, one of its own kind is met  through a rigorous jury process consisting of eminent people and subject matter  experts representing different fields.

As always the celebration ignited the sense of pride for  the people who walked away with the awards.