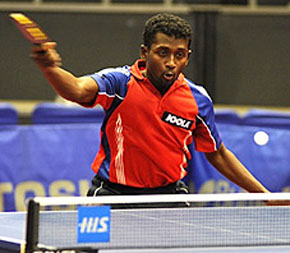 Ping pong, that's how the game of Table Tennis is popularly known as, is slowly turning out to be the strength of Indian sports with every passing year. India is fast catching up with world beater nations such as China, Singapore, Korea, Japan etc. A household name in the country, T.T. is highly fast paced game requiring utmost focus and sharp reflexes. Indian paddlers had won couple of medal in last edition of CWG games with significant contribution from ONGCians.

This year too we have formidable names of the likes of Anthony Amalraj in men's & Madhurika Patkar in women's team.

Amalraj has been associated with ONGC for the past 10 years. Currently holding the designation of Security Officer, Amal Raj has been the face of Indian Table tennis for quite some time.

Amalraj became the Senior National Champion in the year 2012 by beating Sharath Kamal and remained unbeaten in India in that year. He was part of the Indian Men's team that won the Bronze medal at the CWG 2010.

During the Glasgow Commonwealth Championship in the year 2009, he won the bronze medal in the mixed doubles fixture and silver in the team event.

Madhurika Patkar, Sr F&AO is a table tennis player from Maharashtra and has been associated with ONGC since nearly a decade. She has been a regular member of team India since 2007 and is winner of many national level tournaments.

The year 2010 was a remarkable year for Madhurika as she won all 4 Gold medals at the SAF Games held at Dhaka and followed it up with Silver medal in the Women's Team event at Commonwealth Games 2010 held at New Delhi. She won 2 Bronze Medals at the 18th Commonwealth Championship at Glasgow, Scotland in 2009.