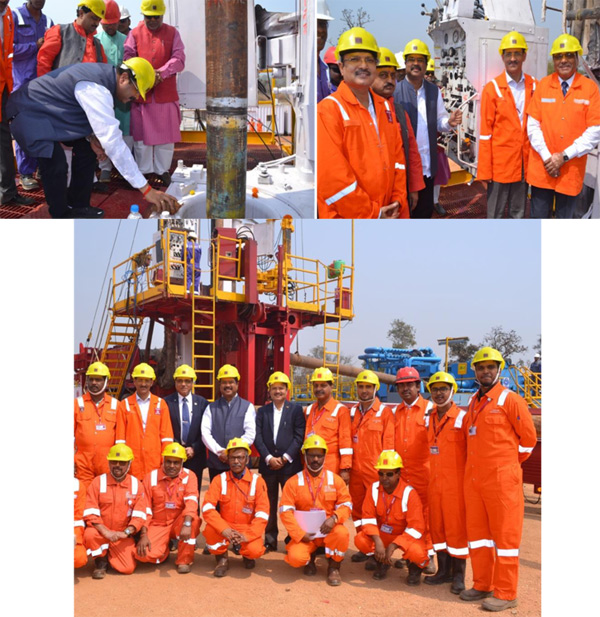 Hon’ble minister and ONGCians at spudding of BE#95

This well is to be drilled by a charted hired drilling rig MR#11 which was hired for one year for drilling of 30 development wells (22 vertical +08 inclined) having a depth range of 400-1400 m.

Hon’ble minister also laid the foundation stone for a Gas Collecting Station (GCS) being constructed by TATA projects at village Khudgara in Gomia of Bokaro district. He was received at the site by ED-CES (Onshore) Anand Mohan & HES P. B. Das and was briefed about the site layout and process flow diagram. This Gas Collecting station will have handling capacity of 8 Lakh Standard Cubic Metre per Day (SCMD) and its construction is expected to be completed by June 2019. Apart from this, two Early Production systems (EPS) with handling capacity of 50,000 SCMD are also to be constructed by December 2018. 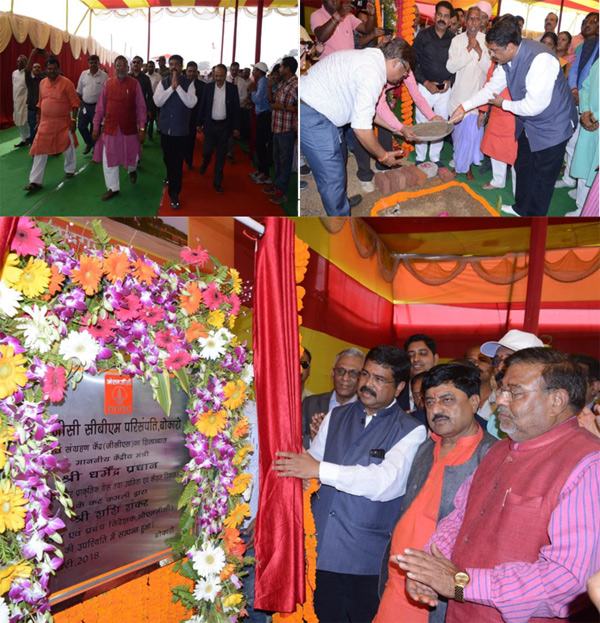 Laying of foundation stone of G.C.S.

Hon’ble Minister also chaired an Asset Review Meet in the Bokaro office to review the performance and future planning for FDP implementation. Detailed discussions were held on various issues of the project like land acquisitions, production and sale of gas, gas prices, etc. Hon’ble minister expressed his satisfaction on the Asset’s performance. He encouraged all of team work to achieve target within the scheduled time frame & advised to work with the same tempo and professionalism.

Bokaro FDP envisages drilling of 141 development wells with an envisaged plateau production of 7.5 Lakhs SCMD. Early monetization is planned for Q1 of 2018-19 till the proposed GCS/EPS comes in place. In total, CBM Asset under the Field Development Plan has a target to drill about 350 wells and develop surface facilities to realize the target production of ~2 MMSCMD from all the four CBM Blocks currently in operation. Estimated development cost for three blocks of Jharkhand (Bokaro, Jharia & North Karanpura) is around 6500 crores.