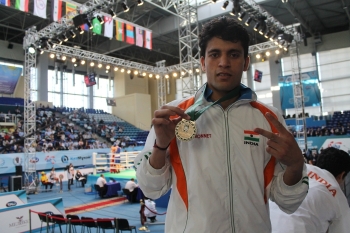 Sumit Sangwan - a proud ONGCian and an 'OLYMPIAN' As London 2012 draws nearer, the heartbeats of more than a billion Indians will throb with immense hope and pride, and nervous energy as well. For at stake will be a chance to carve our name and establish our nation's sporting excellence at the biggest and the most prestigious sporting spectacle - The OLYMPICS. Our heroes who will be representing the nation at the OLYMPICS will carry with them our prayers and wishes, as they compete for the country's glory and global recognition.

The sixth piece of this series profiles Sumit Sangwan, an ONGCian who will be representing India in the discipline of Boxing.

Mr. Sumit Sangwan, one of the most reputed boxers in the country, was born on January 1, 1993 in state of Haryana. He qualified for Olympic 2012 with a remarkable fight during 2012 Asian Boxing Olympic qualification tournament held at Astana, Kazakhstan in which he overpowered 2009 Asian Championship bronze medallist Ihab Almatdault of Jordan to advance into the finals of light heavy weight division. The 19-year-old now becomes the seventh Indian boxer to have qualified for the Olympics.

The London Olympiad, this year, will have a record number of seven Indian boxers participating in the event. Five Indian pugilists had participated in 2008 Beijing Olympics.

Sumit, who upset Beijing Olympian Dinesh Kumar to get a place in the national squad, is thankful to his brother and father for extending him the required support."We belong to a very humble background," said Sumit, "but my family didn't let anything come in between my training, not even financial hurdles. At times, they even cut down on their own expenses". He confesses that support by ONGC, first in the form of scholarship and then by offering employment had helped him a great deal to reach at this level. 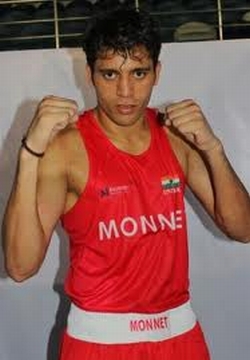 Sumit Sangwan - a proud ONGCian and an 'OLYMPIAN'

OR.net on behalf of every ONGCians wish Sumit Sangwan the very best of luck as he embarks on the journey to bring home more glory and an OLYMPICS medal in Boxing.