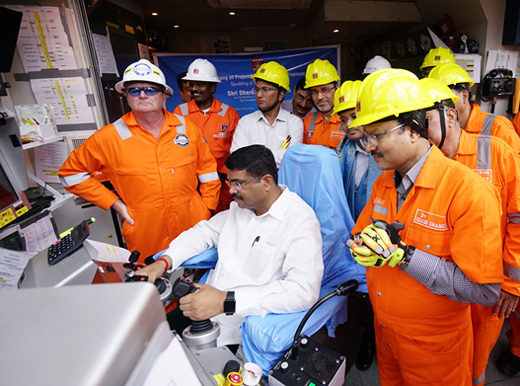 The well #KDG-A is one of the 34 wells planned under this mega project. The deepwater well has a target depth of 2346 meters, under a water depth of 518 meters.  The well is expected to produce around 5000 barrels of oil per day (bopd) when put to production.

This ambitious project of ONGC is going to be a major contributor towards the Hon’ble Prime Minister’s target to reduce nation’s hydrocarbon import dependence by 10 per cent by 2022. The project would cumulatively produce around 25 MMT of oil and 45 BCM of gas with peak production of 78000 barrels per day of oil and 15 MMSCMD of gas. ONGC expects to bring first gas from this project to market by 2019 end and oil by 2020.

Wishing ONGC successful completion of the project KG DWN 98/2 in east coast, Mr. Dharmendra Pradhan emphasized that best-in-class project management will ensure achievement of the targets within time. He also emphasized the Union Govt’s strong commitment towards Andhra Pradesh, which is emerging as a major oil and gas hub of India. “It is our endeavour to make these major investments in oil and gas sector bring prosperity to the people of Andhra Pradesh”, he said. Mr. Pradhan also said that oil sector projects like ONGC’s 98/2, would generate large employment opportunities and leverage local services & materials wherever possible as per the ‘Make in India’ policy.

It may also be noted that the project KG DWN 98/2 involves some of the most advanced oil field technologies in drilling and completion of 34 subsea wells, laying about 425KM of pipeline and 150KM of control umbilical in water depths varying from 300 to 1400 meters. There will be an Offshore Process Platform for processing & evacuating 6.5 MMSCMD of Gas. Balance 5.75 MMSCMD gas shall be transported through ONGC’s existing sub-sea infrastructure and facilities created at onshore terminal of Odalarevu in Andhra coast. Floating Production, Storage and Offloading Vessel ( FPSO) will also be deployed in water depth of 413 meters to process the oil and gas.

The project envisages an CAPEX of 5.07 Billion US Dollars and OPEX of 5.12 Billion US dollars over field life  of 16 years.

After successfully commissioning of its first deepwater project S1 Vasishta in eastern offshore in March 2018 (which would be yielding about 4.3 MMSCMD of gas), ONGC’s flagship project from NELP block KG-DWN-98/2 in the deepwater of eastern offshore is now being readied for development. The project 98/2 would start yielding oil and gas from 2019 end.

Thirty four wells will be drilled under this project. Of these 34 wells, 15 are Oil producing, 8 are Gas Producing and 11 are Water Injecting wells.