While carrying out development drilling in D1 Field, ONGC discovered a new pool of reserves which may catapult D1 to become the third largest field in Western Offshore after prolific Mumbai high and Heera. Earlier the D1 was known to have IOIP (Initial Oil In-place) to the order of 600 million barrel (82.20 million tonne oil equivalent). After the discovery of the new pool, its total IOIP is expected to be in excess of One Billon Barrel (140 mtoe).

The first well in D1-4 block was drilled in the year 1976. The low Gas to Oil Ratio (GOR) and the then understanding of reservoir led to slow pace of exploration and appraisal of the field. As a result, the first development scheme for the D1 Field was confined only to the D1-4 Block in which a total 12 wells were drilled in two phases. After completion of Phase-II, the field achieved a peak oil production of 17,500 BOPD in the year 2009. Currently, D1 is producing on an average of 12,500 bopd.

In the next phase of development, ONGC is presently implementing an Integrated Development Plan for D1 Field. Three new well platforms namely D1-B, D1-C and D1-D have been commissioned in 3 different blocks viz. D1-4, D1-12 and D1-14. Development drilling activities in the blocks of D1-4 and D1-14 have been taken up, which will increase the production from current level of 12,500 to 36,000 bopd by February, 2013

This discovery, notified to DGH, has unfolded an additional oil bearing zone of about 142m. On complete development of the field D1, the production is expected to go up to 60,000 bopd. This additional development program will start yielding results from January, 2014.

CMD, ONGC Sudhir Vasudeva exuberated on this discovery and said, ‘This discovery indeed has come up with a lot of promise signifying a substantial increase in the production for the company. Finally we have made it to a large discovery which was eluding us for long’.

Apart from this D-1-D#1, ONGC notified three more discoveries in last one month as follows:

The Exploratory well produced 115 m3/day and gas @ 11500 m3/day through 6 mm bean. The API gravity of oil produced is 35.70. Compared to earlier lower-productivity basement discoveries, Madnam#3 discovery is a major breakthrough in basement play exploration in Cauvery basin. This discovery well is situated 14 km south-east of Chidambaram town in Tamilnadu.

The Exploratory well produced oil @ 280 bopd and gas @ 114447 m3/day through 6 mm bean. The oil produced has an API of 43.190. This discovery further consolidates the potential of the basal clastic / basement play in Mumbai offshore.

With these notifications, the number of discoveries so far in FY’13 aggregates to 10 (6 Prospects and 4 pools). 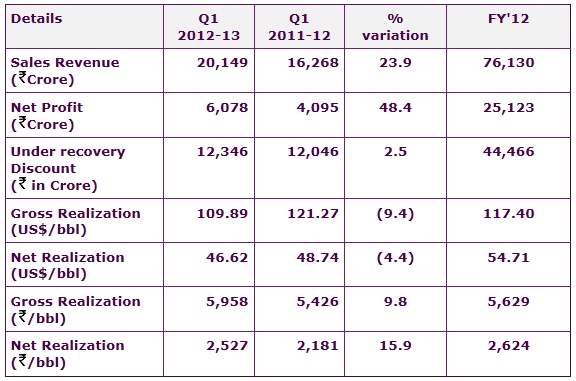 ONGC has successfully validated and submitted request to United Nations Framework Convention on Climate Change (UNFCCC), on 1st August 2012, for registration of Clean Development Mechanism project on its 726 MW natural gas based power plant by ONGC Tripura Power Company (OTPC) for an annual 1,605,006 CER (Certified Emission Reduction). On registration, this will be one of the largest CDM projects globally.