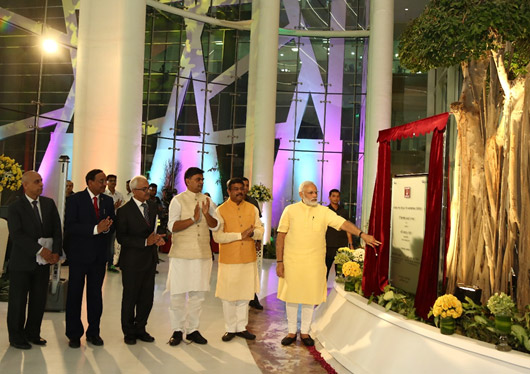 The Deendayal Urja  Bhawan has been awarded the highest LEED (Leadership in Energy and  Environmental Design) Platinum Rating by U.S. Green Building Council. The ONGC  building is a symbol of harmony between Energy & Ecology. It is an  environmentally sustainable building that has been designed, constructed and  operated to minimize the total environmental impact by reducing energy  consumption, water conservation and recycling waste. The project has been  registered as a CDM (Clean Development Mechanism) Project with the United  Nations Framework Convention on Climate Change (UNFCCC).

On this occasion, the PM dedicated the Booster  Processor facility, BCPA 3 platform of ONGC’s Bassein & Satellite Asset in  the country’s Western Offshore via Video Conference. The project will provide  an expected cumulative gas gain of  18.83 BCM with incremental peak gas rate of 9.10 MMSCMD, which will add  to ONGC’s gas production. 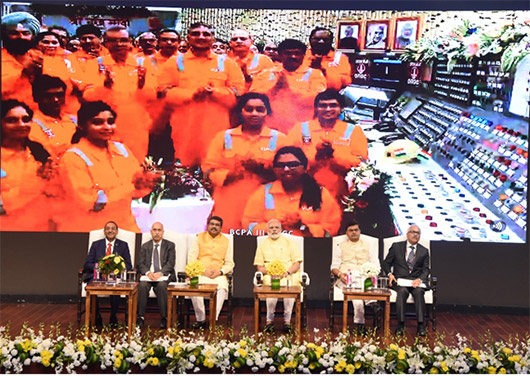 The PM also launched ONGC’s Paperless Office  Project – DISHA at ONGC’s Ahmedabad Asset through Video Conference. The project  envisages carrying out regular office jobs without physical movement of paper  documents/ files. The enterprise wide project, which is one of the major IT  projects among government/ PSUs, is in line with the “Digital India”  initiative, and will create an electronic document management and electronic  workflow environment, which will improve efficiency and enhance transparency in  day to day functioning of ONGC. The PM also interacted with young ONGC  employees at Western Offshore and Ahmedabad Asset through VC.

The PM along with the other  dignitaries earlier visited the ‘Knowledge Centre’, a state-of-the-art Audio  Visual experience zone created in the building. The dignitaries experienced the  technological marvel of Deendayal Urja Bhawan and its unique features as well  as ONGC’s glorious journey of over six decades through captivating digital  displays.