Adding to an impressive list of “firsts”, ONGC ECPF Trust has become arguably the first Provident Fund Trust in India to get ISO Certification ISO 9001:2008 for Quality Management Systems. The ISO Certificate was presented to the Board of Trustees by the Trust team during the 152nd meeting of the Trust. 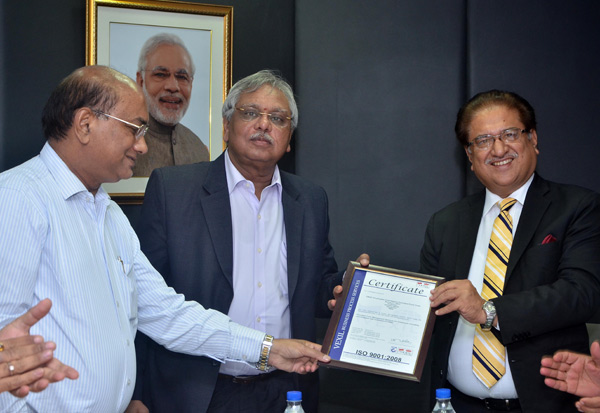 The Board of Trustees appreciated this achievement and also recognized that this was another step towards good governance and transparency through system improvement. It was also remarked that other PF Trusts were approaching ONGC ECPF Trust to learn and adopt many of its new initiatives. Recently, a team of officials of PF Trust of a Maharatna company had visited ONGC ECPF Trust to study and learn the Live Terminal Bidding. Similar requests were also being received from other PF Trusts. ONGC ECPF Trust was willing to share its knowledge and expertise with Provident Fund Trusts of other companies with the awareness that this would bring improvement in Provident Fund related services which could positively impact a large number of people across companies and sectors. 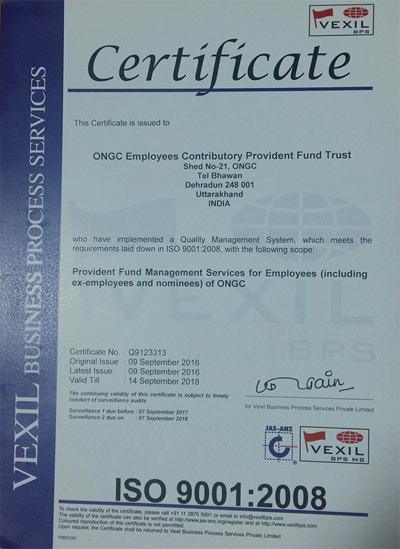 Recently, ONGC ECPF Trust had raised the bar regarding transparency and digital initiatives by becoming the first Provident Fund Trust in India to start Live Terminal Bidding for investments. This achievement was acknowledged in media also with online edition of Times of India and some other websites covering it under the heading “Good Governance”.

The ECPF Trust team informed that the ISO Certification process was not easy as there was no precedent to look-up to since no other PF Trust had attempted it before. Even the Certification agency had to put in extra efforts as they also did not have any prior experience on certification of a Provident Fund Trust. But the Trust team took it up as a challenge and step by step moved ahead and finally achieved the goal. The challenge was not only to enter uncharted territory but also to put out all the systems, process and workflows of ECPF Trust for scrutiny and certification by outside certification body which was achieved successfully.

One of the key drivers of success of this process was the unwavering support of Trustees of ECPF Trust who encouraged and motivated the team for implementation of this process.

As improvement and innovation is an ongoing process, ECPF Trust team has already started working on several new initiatives including mobile app based access to ECPF Webpage on ONGC Reports and online-tracking facility of NRW and 90% claims on a real-time basis in WEBICE which will be implemented soon.