A  cheque of Rs. 15 crores was handed over to Shri Vijay Ramniklal Rupani, Hon’ble  Chief Minister of Gujarat by the representatives of Oil companies led by ONGC CMD  Shri D K Sarraf at the CM’s Office in Ahmedabad today. 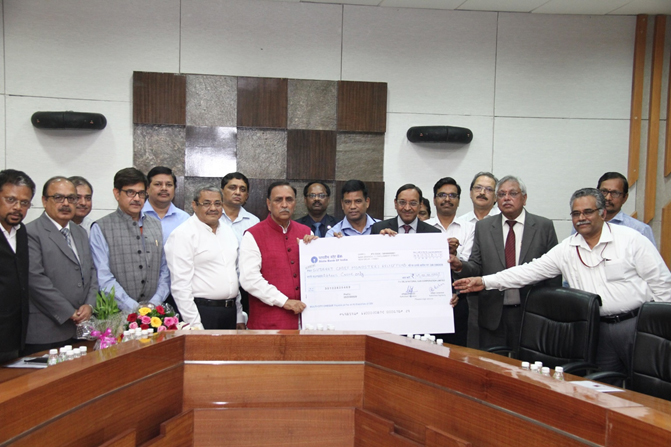 This  is an initiative taken by the Central Oil PSUs under the leadership of Shri  Dharmendra Pradhan, Hon’ble Union Cabinet Minister for Petroleum & Natural  Gas, Government of India.

Additionally,  as part of its CSR initiative ONGC’s Ahmedabad and Mehsana Asset had carried  out flood relief activity through distribution of food packets, drinking water,  preventive medicine, utensil sets and hygiene kits in association with the  district administration in the districts of Banaskantha, Palanpur and Patan. A  state of the art dewatering unit was also pressed into service for removal of  flood water from a 66 KV power Sub Station which supplies electricity to the  entire Gandhinagar District.

As  responsible corporate citizens, Oil PSUs have extended a helping hand to the  State machinery in dealing with the magnitude of destruction and damage caused  by the recent floods which has resulted in large scale loss of lives and  property and displacement of lakhs of people from their homes.

The  Chief Minister highly appreciated and thanked all the oil PSUs for extending  their helping hand to the flood affected people of Gujarat.