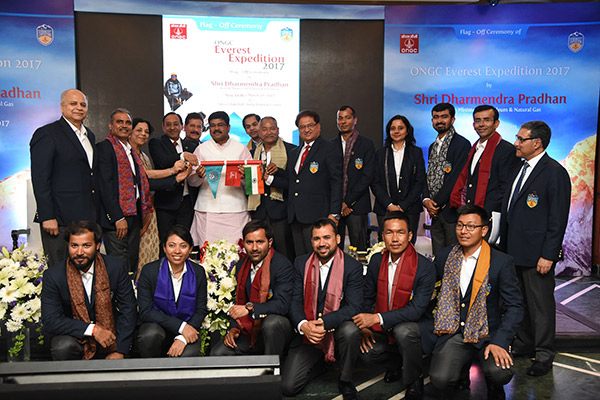 This  is a first of its kind initiative undertaken by any corporate so far to scale  Mount Everest - the highest place on the Earth at an altitude of 8848 mts.

Addressing  the gathering on the occasion, Shri Dharmendra Pradhan said that it would  indeed be matter for pride for not only ONGC but also the entire nation once  the expedition team comes back with flying colors. “I see future leaders in  each of the expedition members, as when you counter the elements, no challenge  seems too big to surmount”, he said. Appreciating the inclusion of two women  ONGC executives, Shri Pradhan “We look forward to welcoming you back and  celebrate the spirit of success, adventure and camaraderie”.

The  Hon’ble Minister said that such initiatives will set the benchmarks for other  corporates to emulate.

The  kick off to the function witnessed immense enthusiasm from the team of 11 young  ONGCians drawn from different disciplines raring to scale the highest peak of  the world and extend ONGC’s footprint beyond the scale of any human  imagination. 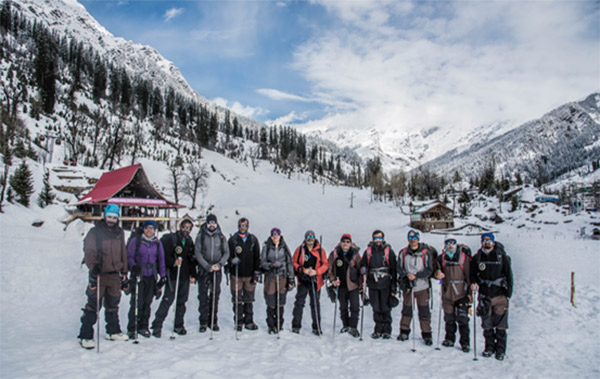 The  entire team of ONGC has been trained for this herculean task by experts from  IMF.

This  is also an attempt from ONGC, with a workforce of 33000, to prepare a team of youngsters  who had little or no formal knowledge or skills in mountaineering craft to  attempt scale the highest peak on the Earth.

The  genesis of ONGC’s Everest Expedition began about two years back in October 2015  when ONGC Everest successfully completed the trek to Everest Base Camp  (17000ft) with a team of 21 climbers. From here began a Mission to scale Mt.  Everest in 2017.

Over  150 Everest aspirants underwent a strenuous selection process before the final  team for the Summit was identified.

The  entire selection and training took nearly 15 months and had an eight stage  elimination process which tested the physical and mental endurance levels of  the participants.

A  coffee table book titled ‘JUNGLE! The Forests of India’ authored by  renowned wildlife photographer Sunjoy Monga was also released by the Minister  on the occasion. The book is a first that captures all the forests of India,  right from Himalayas to the Andamans. ONGC has been associated with the  publication of the book, which captures the rich biodiversity of our country  and spreading awareness about protecting its ecosystem.

CMD, ONGC Shri D K Sarraf said “The expedition of this  nature needs enormous courage, conviction and discipline. These are also the  basic needs for a company like ONGC where we have to live with and defeat  uncertainties”. He further added that the team that is going for this  expedition has already displayed sheer courage and confidence and most  importantly team spirit. We have also planned to train and send teams for Everest  Expedition every year.

Director HR D D Misra, who is the driving force behind  this initiative, outlined various stages of training programme those have been  imparted to the participants in the expedition. He said that out of over 150  employees, finally 11 have completed the stringent eligibility criteria for  this programme.

The ONGC Board of Directors and senior officials from  MoPNG and oil PSUs wished the Everest Expedition Team the very best in this  challenging endeavor.