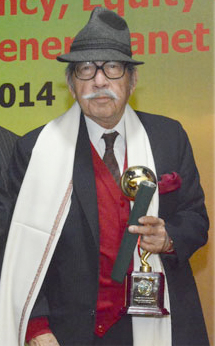 Col Satya  Pal Wahi was an  Indian corporate executive, army personnel, technocrat, writer and a former  chairman of public sector enterprises ONGC and Cement Corporation of India(CCI). He is a former Indian Army Colonel at the Corps of EME.

Mr. Wahi was  born in Khushab, a small village near Lahore of the British India. He graduated in Electrical and Mechanical  Engineering fromBanaras Hindu University.Subsequently, he joined theIndian Military Academy, Dehradun, and after completing his training  in 1950, served at the Corps of EME of the Indian  Army, retiring  from military service holding the rank of a colonel.

Later, he served  many corporate enterprises which includedBokaro Steel Plant(1969-74),Bharat Heavy Electricals(BHEL) (1974-78),handling various portfolios, before joiningCement Corporation of India(CCI), a wholly owned company of the  Government of India as its chairman. He is known to have turned the loss-making  CCI into a profitable business enterprise and in 1981, he was appointed as the  chairman ofONGC, the largest oil and gas exploration and  production company in India.

His tenure at  ONGC coincided with the development of Bombay  Highoffshore  oilfields and he is credited with contributions in raising India's oil output from 9 million tonnes to 32 million tonnes per annum.His efforts are also  reported behind the modernization of the organization by the introduction of computerization and modern office facilities and the establishment of a  training center for the organization.

There were a number of occasions where Col. Wahi's charismatic leadership was hailed all across. One such incident was his deft handling of the Blow Out in the offshore drilling rig Sagar Vikas. His professional stewardship in the case not only handled the blow-out effectively, but ONGC was praised all over the media for the courageous act of the Oil Soldiers of India - 'The quiet confidence of India's Oil men in handling the crisis'. A more significant victory, perhaps, was the confidence that grew in the cadres of ONGC after this incident.

After his stint at ONGC, he was  associated with Bharat Ophthalmic Glass Limited and served as the Chairman of  the Standing Committee of Public Enterprises(SCOPE).

A recipient of  the degree of Doctor of Science(honoris  causa) from  three Indian universities, Wahi has also received honors such as Petrotech Lifetime Achievement Award,Indian Geophysical UnionSilver jubilee Award and Giants  international Award. The Government of India awarded him the third highest  civilian honor of thePadma  Bhushan, in 1988,  for his iconic contributions to society.

The mortal remains of Col. Wahi will be cremated at Dayanand Muktidham Cremation Ground, Lodhi Road, New Delhi at 2 pm on 14 February 2017.