The Ghats, the  temples and the Kunds of Varanasi are the driving force which attracts millions  of tourists to this ancient city every year. Over the years, these divine  structures have survived wars and natural calamities and have been a lifeline for  the city of Varanasi. Today, the Kunds of Varanasi are at a crossroads. Having  served the society for centuries, they need our support to re-claim their lost  glory. People of Varanasi want the Kunds to be restored, so do the tourists and  devotees visiting Varanasi. 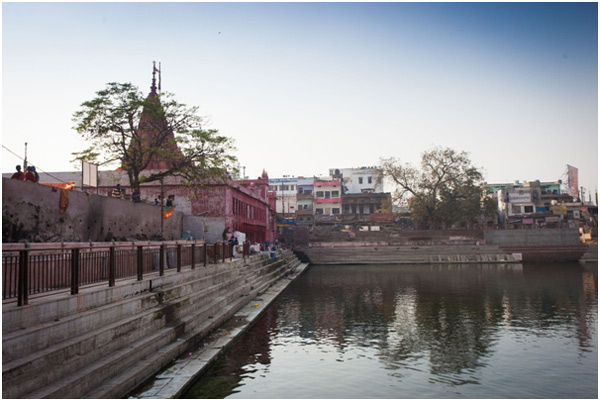 The corner view of  Durga  Kund, which is under renovation

Considering the  mandate of the countrymen, Energy Maharatna ONGC has taken the responsibility  for cleaning and beatifying the four famous Kunds namely Durga Kund, Lakshmi  Kund, Sarangnath Kund and Lat Bhairav Kund. The ONGC Board approved this  flagship CSR project with financial implication of Rs 11.46 Cr. The project is  currently under implementation in partnership with M/s National Buildings  Construction Corporation Ltd. (NBCC) and Varanasi Nagar Nigam. After signing of  the tripartite agreement, an amount of Rs 3.82 Cr, has already been released  and the work is in progress.

Prior to taking up  the project, ONGC engaged an independent agency to carry out a feasibility  study and to prepare the Detailed Project Report (DPR). Based on the recommendation,  the project activities were initiated by M/s NBCC.

Challenges were many  in the implementation of this project. Starting from identifying the project  partner to addressing the demand of the local people. ONGC CSR representatives  coordinated with the local authorities, attended meeting with the native  residents, negotiated with Trustee, who have the ownership of few of the Kunds  to make sure that the project is implemented in the right spirit. Over the  years, residential houses has come up right across the Kunds, blocking the  natural drainage. With Nagar Nigam, Varanasi being a partner, engaged in addressing  such local issues to facilitating timely execution of the project.

The project  activities include general civil works including railings, electrical fittings,  landscaping, beautification, construction of barriers to check the ingress of  pollutants to the water of the Kunds and further purification of water through anaerobic bioremediation method. There is also a provision for maintenance  and upkeep of the Kunds for five years through the implementing agency.

Some of the Kunds have been totally drained off  water for the cleaning of debris while in some others where there is presence of large aqua life,  water was not removed instead other scientific methods are being adopted for water purification without  disturbing the aquatic life.

Currently, work is under progress at the Kunds. The photographs below elaborates  on the progress of work in three of the Kunds. After completing the entire beautification and  cleaning of the Kunds, ONGC will further take care of the upkeep and  maintenance of these Kunds for five years. As the work is in the final phase of  completion, local resident, tourist, public institution are all complimenting  ONGC for restoring&nbsp; the Kunds which were  neglected for decades.