Speaking on the occasion. Shri Pradhan said that the Junior Hockey World Cup win proclaims the tremendous work that the Petroleum Sports Promotion Board (PSPB) is doing for the country. He congratulated the players and motivated them to work harder and achieve laurels in the sports at the highest level. 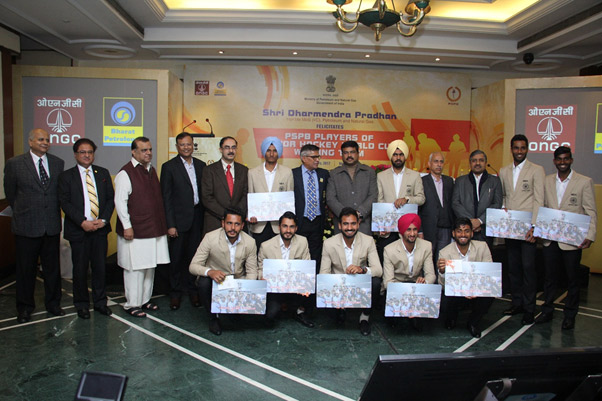 India is the only host country to win the title. In this latest competition held at Lucknow in December, 2016, the Indian team had 5 players from ONGC and 5 players from Bharat Petroleum (BPCL). Gurjant Singh, Mandeep Singh, Simranjeet Singh, Vikramjit Singh and Sumit Singh are ONGC players while Harjeet Singh (captain), Vikas Dahiya, Harmanpreet Singh, Varun Kumar and Dipsan Tirkey are BPCL players.

ONGC players Gurjant Singh, Simranjeet Singh and Mandeep Singh were match winning scorers in the semi-final and also in the final, beating Belgium 2-1.

The win has been possible because of excellent skills and temperament shown by the players throughout the tournament.

The commendable efforts put in by leading corporates like ONGC and BPCL in nurturing the young talented players to World class level is indeed praiseworthy. These players have been groomed in the scholarship program of ONGC and BPCL, providing world class facilities and nurturing and grooming raw talent.

Hockey Jr. World Cup had its beginning in 1979 and since 1985 it is held every four years. Two teams from each continent are selected through qualification rounds for the Championship round. Germany has won the Jr. World Cup titles 6 times.