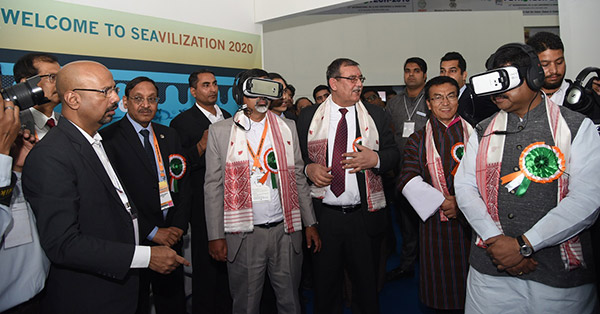 The Hon’ble Minister of State (independent Charge) for Petroleum & Natural Gas Mr. Dharmendra Pradhan spent a large share of his time in the ONGC Pavilion, after inaugurating the Exhibition of Petrotech-2016 at Pragati Maidan on 4 December 2016. The ONGC Pavilion sported a number of state-of-the-art features like a Virtual Reality theatre, a 270 degree immersive theatre, a 3D hologram-based image of the new Green Building of ONGC at Vasant Kunj, and a host of similar attractions.

Petroleum Minister along with Ministers from Nepal, Bhutan,Mauritius and Iraq inaugurating the ONGC Pavilion in Petrotech-2016, with ONGC CMD

Oil Ministers from other countries like Bhutan, Mauritius, Nepal and Iraq accompanies the Indian Petroleum Minister as he toured the various Pavilions in hall number 18 of Pragati Maidan. Mr. Dharmendra Pradhan asked the visiting oil ministers to join him in cutting the ribbon of ONGC pavilion and, lighting the lamp thereafter.

The traditional lamp being lit in the ONGC Pavilion by the Petroleum Minister and foreign Ministers. Director (Offshore) also seen on the left

Another interesting and unique feature of the ONGC pavilion is the Augmented Reality game zone. It provides a real life experience of wilderness, weatherstrom and rainfall. Visitors gets to click pictures with wild animals and extreme weather conditions. Sixty years of ONGC were displayed through digital media- Rotoscope touch technology making user friendly and entertaining experience for the visitors.

The other Pavilions also wanted to invite the Minister to come and visit their stalls. However, after spending a substantive amount of time in the ONGC Pavilion, the Minister had to rush through the other Pavilions. Over 600 exhibitors from 36 countries have participated in this Petrotech-2016, which includes 15 country pavilions from Russia, China and Canada.

The Petroleum Minister in the Make In India Pavilion of ONGC

Earlier, the Indian Petroleum Minister Mr. Dharmendra Pradhan inaugurated the Exhibition of Petrotech-2016 amidst a hall packed with delegates. Addressing the delegates, the Minister said that this international Petrotech Conference and Exhibition is the right platform for taking the global energy industry forward through sharing of technologies and fostering innovation. Mr. Pradhan said that oil &amp; gas sector is a vehicle for socio economic change in India. "We are trying to align with the energy needs of common man and put our best efforts to address his needs. This conference will act as a lynchpin in boosting trade and enhancing strategic partnerships, giving ample opportunies to learn, expand and earn."

The 3-day Conference will be inaugurated by the Hon’ble Prime Minister of India in Vigyan Bhawan on 5 December 2016.