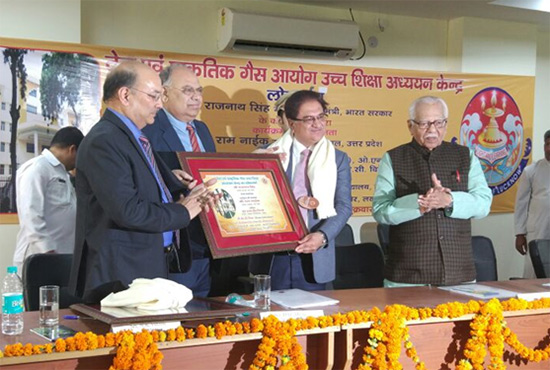 Shri Ram Naik lauded the efforts of ONGC for its role in industry, it's quest for excellence and as a role model in the field of CSR.

hri Misra, Director HR said that ONGC is committed to the progress of society through its novel CSR initiatives. "ONGC being a responsible corporate is committed to social responsibilities through CSR activities and education is one of the key focus areas. ONGC will continue its association with academic institutions for quality higher education", he said. He lauded the inspirational guidance, leadership and directions of Shri Dharmendra Pradhan, MoS (I/C) MoPNG in the setting up of this ONGC Centre for Advance Studies.

Shri Verma spoke about the synergy that is needed between the academia and the industry to bridge the knowledge gap and said that the setting up of ONGC Center is a step in that direction.

Vice Chancellor of Lucknow University Dr Nimse thanked ONGC for its commitment in making this ONGC Centre for Advance Studies a reality. Dr Dinesh Sharma, Mayor of Lucknow was also present on this occasion.

Later, Shri Misra also visited the Department of Public Administration of Lucknow University. He was welcomed by Professor (Dr) Manoj Dixit, Head of Department along with other faculty members and students. In his interaction Shri Misra spoke from his heart. A first batch alumnus of the department, Shri Misra motivated  students to excel, explore, be inquisitive, set goals, think big, and to have at least one passion in life. He said nothing could be better than having your passion as your profession.