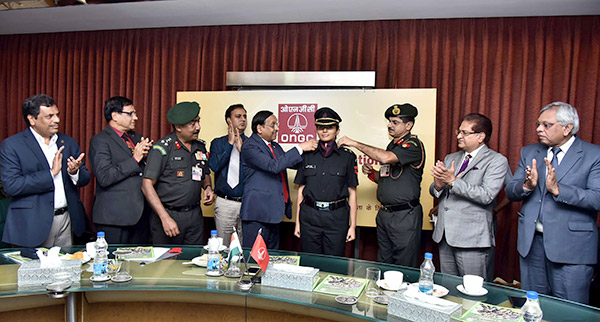 ED-Chief Security Mr. D C Srivastva,in his opening remarks, said that it’s an extremely proud moment for ONGC and energy fraternity. “ONGCian Mrs.Shilpy Gragmukh succeeding to status of a first lady officer in Territorial Army is a matter of great honor. Achievement of Mrs. Gargmukh will serve as an example to all women employees and will embolden their spirits to join Territorial Army.” He mentioned that vacancies for joining TA advertised through ONGCreports received an astounding response. 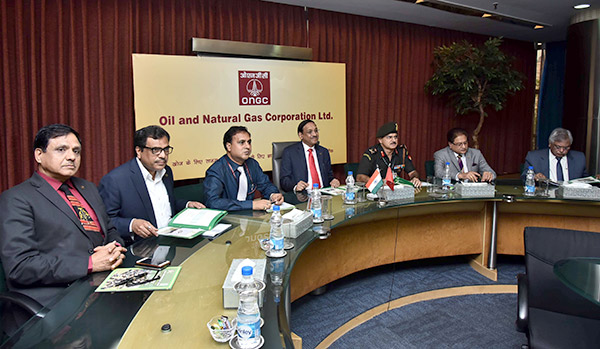 As of now total of 11 women employees are undergoing through various stages of selection process in Territorial Army. Mr Srivastva illustrated about various motivational workshops being conducted by Corporate Security Department at various centers of ONGC. And they intend to continue conducting such workshops, encouraging employees to join TA.

Lt. Col. S S Sodhi, second in command of 811 Engineers' Regiment ONGC (TA) informed that the doors of the regiment have been opened for the ladies after 27 years of its regime. The ONGC TA has been service embodied for various crises like Assam agitation, earthquakes, riots, strikes, etc.

Brigadier S K Narain from Territorial Army commended Mrs. Shilpy Gargmukh for her achievement and apprised about the role of Territorial Army. He stated that Territorial Army is a part of regular Army and renders its services during natural calamities, riots or insurrections.

Director (HR) Mr. D. D. Misra congratulated the young officer and talked about the growing importance of women in corporate. He said that women empowerment is not an option but necessity of corporate sector. Mr Misra stated that ONGC has always promoted women to achieve newer professional heights. ONGC has also appointed Mrs. Indira Parekh (Ex IIM-A Dean) as a consultant to formulate policies for women empowerment.

CMD and Director (HR) expressing their views on the occasion

CMD Mr D K Sarraf applauded the accomplishment of Mrs. Shilpy Gargmukh and enunciated the noteworthy role Territorial Army during the times of insurgency.He said that TA officer possess the dual responsibility of serving the nation. Their primary responsibility is to serve their parent organization and at the time of need/ disaster they need to render their services to the nation. He stated that all ONGCians are energy soldiers, ensuring energy security for the nation. He coined the phrase “Army within Army” complimenting the ONGCians who are a part of Territorial Army.Major General Sanjay Soi presented a memento our CMD, Mr. D K Sarraf to commemorate the commissioning of an ONGC Officer in TA. 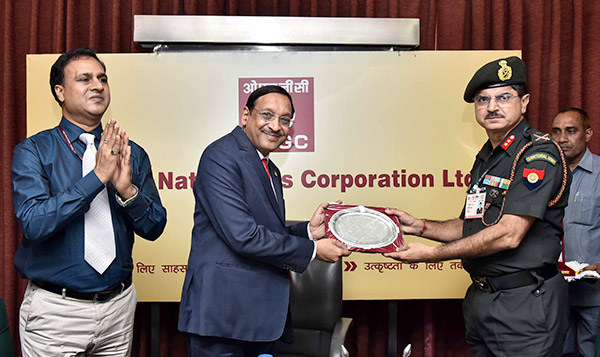 Mrs. Shilpy Gargmukh, speaking to ONGCreports, credited ONGC in helping her achieve this prestigious position. She said that both her brothers are serving in the armed forces. The newly commissioned lieutenant said that the olive green uniform has always fascinated her and the training for TA has prepared her to serve the nation as a combat soldier.

Colonel Rajesh Kala proposed a vote of thanks to the house to conclude the ceremony.