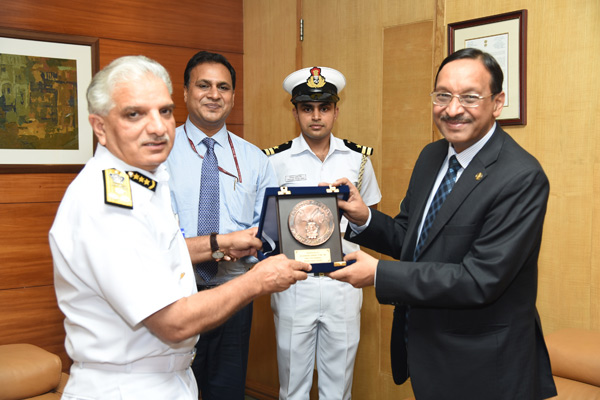 DG Coast Guard (left) presenting a memento to ONGC CMD at the latter's office on 7 June 2016Director General, Coast Guard Mr. Rajendra Singh, PTM, TM,  called on ONGC CMD Mr. D. K. Sarraf, in the latter’s New Delhi office on  morning of 7 June 2016. ED – Chief  Security, Mr. Devesh Chandra Srivastva, IPS, was also present on the  occasion.During the interaction, Mr.  Singh complimented the work of ONGC towards ‘Energy Security’ of the nation and  nation building.&nbsp; He also assured CMD of  their continued support in the security of vital offshore installations and  explained in detail about the various steps being taken by the Coast Guard to  further augment the coastal security set up.

During the meeting, he elaborated the concept of coastal  security in India and the role of Coast Guard in the entire scheme of things,  while requesting ONGC for being proactive in ensuring security of their  offshore installations.

Mr. Sarraf,  while appreciating the efforts of Coast Guard in the past, search / rescue  operations and security of offshore ONGC installations, hoped that in the  fragile security scenario and heightened threat perception, ONGC would receive  better support from the Coast Guard / Navy. CMD also observed that all the relevant issues are being discussed in  the six monthly Offshore Coordination Committee meeting being convened by ONGC and extended his full support for resolution of various pending issues, as  well. During the meeting, DG, Coast  Guard also disclosed that he started his career as a Geophysicist in ONGC, KDMIPE,  Dehradun, after doing his post-graduation in Science before moving to join  the Coast Guard in 1980.