Director (T&FS) Mr. Shashi Shanker, Director (HR) Mr. D D Misra  and Director (Finance) Mr. A K Srinivasan jointly launched “Live Terminal  Bidding” process (Phase-II of e-tendering process) on 24 May 2016, for the  investments of ONGC ECPF Trust. With this, ONGC ECPF Trust has become the first  Provident Fund Trust in India to implement this functionality in its entirety and that too with only  in-house support. This functionality will result in significant improvement in  earnings for ONGC ECPF Trust as well as bring more transparency, accountability  and better record-keeping. 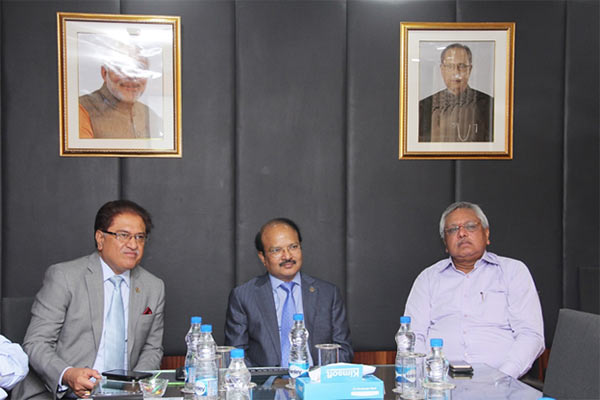 The Directors took time out from  their busy schedules and witnessed the live bidding for investment. After the  process was over, the Directors appreciated the ECPF Trust team and ICE-MM team  for their efforts. They remarked that it was these types of initiatives which  enhance the goodwill of ONGC and firmly put it as a pioneering organization.  Also present on the occasion were ED-Chief ER Mr. Pradeep Sahariya, GM- Head  ICE – Mr. Dharam Raj, GM-HR- Head Trusts Mr. K. Ambedkar. From ICE-MM team  In-charge MM SRM Mr. Shishir Agarwal and Mr. Amit Agarwal, Chief Manager (MM).  The ECPF Trust team was represented by Mr. S.K. Sutaria DGM (F&A) and Mr.  Hemant Kundra, Manager (F&A).

When Phase-I of e-tendering  process was implemented last year, ECPF Trust had made the interface with  outside entities for investments totally system-based with each entity getting  a login from which they could submit their quotes within the cut-off time and  could avail many other facilities. This had led to transparency and high level  security as the bids were now being submitted through e-tender website of ONGC  and information was being stored on ONGC servers with time stamp and was  available for review as and when required.

Now with the launch of “Live Terminal Bidding” process (Phase-II of e-tendering process)  this has been taken a step further. The empanelled entities can actually  improve their offers through the secure “Live Terminal Bidding” functionality  provided to them in the e-tendering website. This will ensure increased  competition and will lead to considerable improvement in earnings of ECPF  Trust. This will also ensure complete transparency in the process as all  related entities will be able to see in a live environment what are the best  offers and where they stand. All this will happen in a secured and confidential  space as other information like names of entities will not be visible on the  Live Terminal. This is a complex yet extremely effective and beneficial  functionality for all concerned.

With its implementation, ONGC ECPF Trust has entered uncharted  territory as none of the Provident Fund Trusts in India has implemented this  functionality in its entirety at present. One or two Trusts have tried to  implement it but have succeeded in only partial implementation and that too  after outsourcing the process. This is where this achievement becomes so  special. Not only has this been implemented in its entirety (it will be actual  bidding in real-time and will continue till every entity has exhausted their  means) but it has been developed with totally in-house expertise.

This is a joint effort of ECPF Trust team and ICE-MM team across  several months. In fact, the ideation process for this had started with the implementation of Phase-I itself. That’s why it was named as “Phase-I” despite  it being an independent and extremely important functionality; to remind that  something better (Phase-II) was still to come. Several technical and functional  challenges were faced during the development of the process but with sustained  and sincere efforts of both the teams slowly but surely all challenges were  overcome. Thereafter, thorough testing of the system was conducted internally  and then the outside entities were trained in the usage of the system. Final  live testing was conducted with actual data which was also successful paving  the way for the implementation of this path-breaking functionality for  investments of ONGC ECPF Trust. It is planned to implement this functionality  in other welfare Trusts of ONGC soon.

Throughout this process, there was unwavering support of Trustees of  ECPF Trust in general and Director (Finance), Director (HR) and ED-Chief ER in  particular who encouraged and motivated the teams for early implementation of  this process. During development of the process, Head-ICE was personally  involved and monitored the status of development. ICE-MM team including Mr.  Shishir Agarwal (In charge), Mr. Keshava Kumar, Mr. Amit Agarwal and others  gave full support to ECPF Team to make this development a success.