ONGC has become the first E&P company in India to execute Under Balance Drilling. Drilling Services, Mumbai region has implemented Under-Balanced Drilling (UBD) pilot project in the Heera and Mumbai High fields. The objectives are:

In line  with above objectives, drilling was initiated using base oil which was replaced  by produced fluid as the drilling proceeded. Average ECD of 4.1 MWE was achieved  during drilling of first well and which was further reduced to 3.9 MWE in second  well. Lower completion was run and packer was set in flowing conditions in both  wells.

Project Planning: Designing under balanced  drilling process in which produced fluid was to be stored and circulated for  drilling that also on an offshore rig was a colossal task. Each project activity was planned and executed with  exhaustive deliberations. With full support from each of the many stake  holders, project was designed and built to the execution stage.] 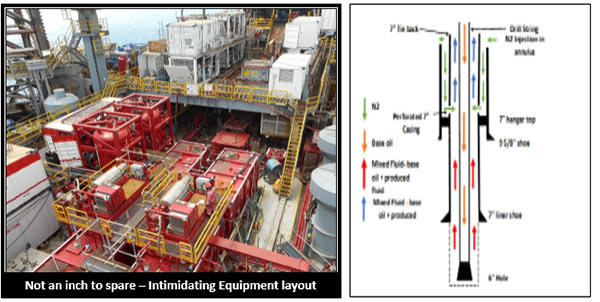 A Hazard  Identification (HAZID) analysis for identification of Hazards was carried out  through independent facilitator and all the observations of the HAZID were  closed. Subsequently during Hazard Operability (HAZOP) analysis, Process Flow Diagrams  (PFD), Process &amp; Instrumentation Diagrams (P&ID), Valve Numbering Diagrams  (VND) and detailed procedures has been discussed and finalized. Further, OISD  has given its consent for the UBD project. Detailed Drilling Well On Paper  (DWOP) has been deliberated and drafted for the execution of UB drilling  phase.

Project Execution: Drilling  up to landing point in three wells of HK has been completed by 17th March 2016.  UBD equipment rig up was started on 6th March 2016 while rig was preparing the  wells for UBD. After initial teething during commissioning, Under Balance  Drilling phase in first well HK#2H was started on 6thApril 2016. Drilling was initiated  with 100 psi of under balance by injecting Nitrogen in concentric annulus of  9-5/8” x 7” tie back casing while pumping base oil as drilling fluid. 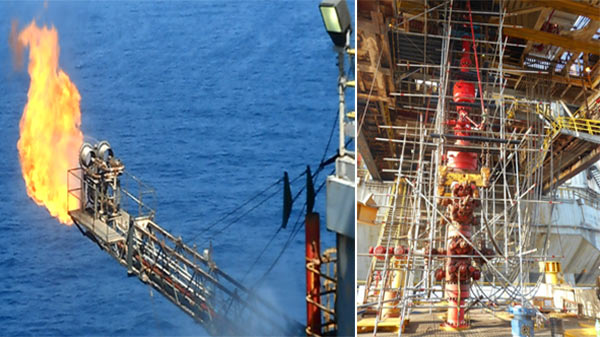 With  the experience gained from first well and based on lessons learnt, equipment  rig up on second well HK#9H was completed in 5.5 days. Well started producing  crude while drilling 6” drain hole in under balanced condition. In flow test well  produced crude at average rate of 1683 bopd. Driling was terminated by real  time analysis of reservoir fluid along with LWD logs.

With  determined efforts in planning & execution, Team Drilling Services - Mumbai  along with active stake-holders have completed two wells of the Under Balance  drilling project and paved the way for drilling and assessing depleted  reservoirs simultaneously.