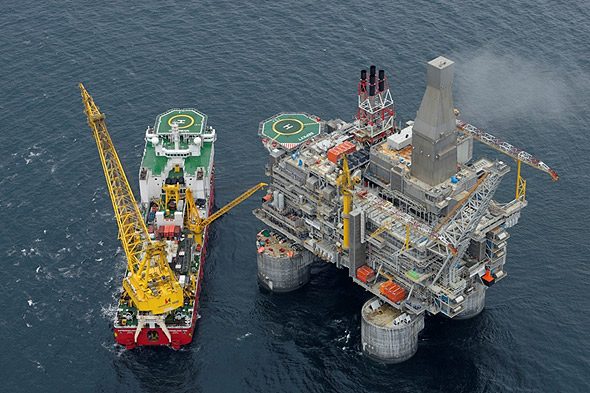 An aerial view of 'Berkut' Platform at the Arkutun Dagi fieldThe flagship project of ONGC Videsh ‘Sakhalin 1’ in Far East Russia have added another feather to its crown by commencing production from Arkutun Dagi, the third and final field being developed as part of the larger Sakhalin 1 project. The Arkutun-Dagi oil and gas field is located 25 km offshore Sakhalin Island in water depths ranging from 15 to 40 m.

The commercial oil production at the Arkutun-Dagi field commenced in strict compliance with the approved schedule, defined technological specifications and adherence to all industrial and ecological safety legislations. The other two fields Chayvo and Odoptu has been producing since 2005 and 2010, respectively. 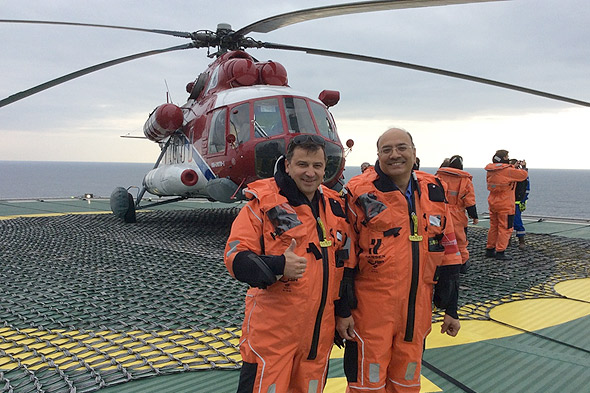 On 5th January 2015, commercial production from the 1st development well was achieved and presently the field is producing at around 12,000 BOPD and is under stabilization. The peak production of around 80,000- 85,000 BOPD is expected with 20 producers in 2019. Production from Arkutun-Dagi field is routed through the existing Chayvo onshore processing facility on Sakhalin Island and delivered through pipelines to the De-Kastri oil export terminal located in Khabarovsk Krai, Russia.

Congratulating the Team for the safe and successful development of Sakhalin-1’s third field Arkutun-Dagi, Managing Director - CEO, Mr. Narendra K Verma added that the start-up of this field will allow the consortium to acquire new competencies while adding benefits to the local community. 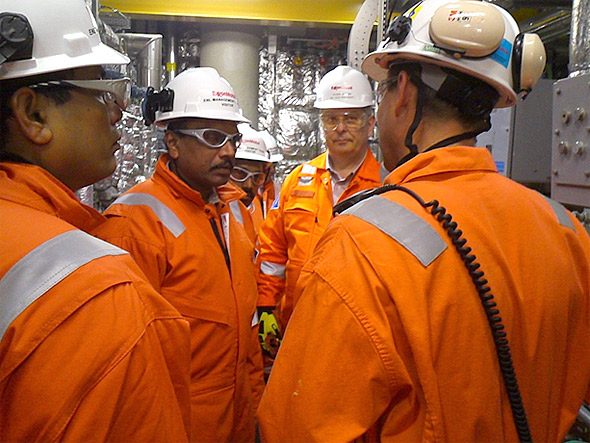 Director (Operations) P K Rao (2nd from left) in animated discussions with the Consortium PartnersDirector (Operations) of ONGC Videsh Mr. P K Rao added that compliance with all obligations in terms of schedule and quality epitomizes the technical prowess of the Consortium. The start of commercial production from the field will bring the total daily production from the Sakhalin project to 200,000 barrels in FY 2015-16.

In June 2014, the project had successfully and safely completed the installation of the topsides offshore platform named ‘Berkut platform’ onto the gravity-based structure at the Arkutun-Dagi field. This operation had set a world record for the heaviest integrated topsides installed by float-over method in open sea. The total weight of this giant structure is about 42,000 tons, it contains over 1900 km of cables and over 97 km of piping. 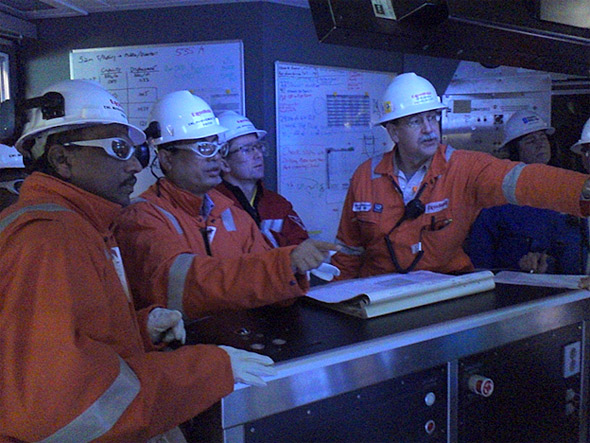 Seen in the picture (extreme left), Director (Operations) in discussion with Consortium Partners in Control Room on board Berkut PlatformPrior to the installation, the topsides were towed to site covering approximately 2,600 kilometers in 12 days without incident from its fabrication site in South Korea. The largest ocean going launch/cargo barge in the world was used for delivery and float-over of the structure.  The length of the platform is 105 meters, its width is 60 meters, and the height with the bottom is 144 meters. It almost equals the 50-storied building. The ‘Berkut’ Offshore platform is equipped with the world's most powerful drilling rig capable of drilling wells with horizontal displacement of up to 7 km, and technically up to 14 kms, and is designed to work in harsh subarctic conditions. The rig has world's most powerful top drive with rotational moment of 142 kilo newtons meter, and lifting capacity of 1150 tons.

The Berkut platform has introduced the earthquake protection system for the first time in the world, which is able to stand 9 magnitude earthquakes without violation of operation efficiency. It can stand low temperatures and is designed for operation under the conditions of -44ºC. It can stand the 18 meters wave (almost a tsunami) and 2 meter ice pressure. Through this platform 45 wells will be drilled. This showcases the technical prowess, high professionalism and distinctive competencies of the consortium.

ONGC Videsh is confident that with the production from Arkutun Dagi the return on massive investments will bear positive results.  Well begun is indeed half done!