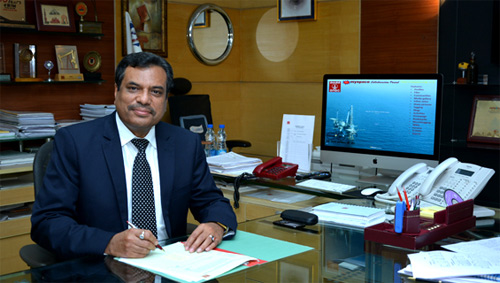 Director (Exploration) Ajay Kumar DwivediMr Ajay Kumar Dwivedi has taken over as the Director (Exploration) in the Maharatna Board of India’s flagship explorer ONGC. A post-graduate from Kanpur University, Mr Dwivedi has a distinguished career of more than 34 years in ONGC, holding key exploration-related assignments at different work centers starting from Mumbai, moving to Dehradun in North, Chennai in South, Jorhat in east, Vadodara in the west and MBA Basin in Kolkata, before taking over Western Offshore as Basin Manager.

His keen analytical acumen coupled with a people-centric approach has been his forte. Mr Dwivedi was involved in redesigning structure, systems and business processes aligned to Asset based model and also looked after the implementation of this new approach in two pilot projects. As a member of the task force formed by Director (Exploration), he was entrusted with the responsibility of formulating long term exploration strategy for ONGC.

Known for his wide knowledge and technical prowess, Mr Dwivedi has authored a number of technical papers, including ‘Acoustic impedance as a lithological and hydrocarbon indicator – A case study from Cauvery basin’ published in Leading Edge in July 2006.