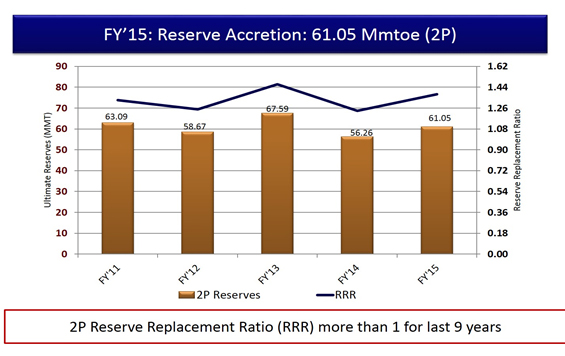 6. Impact of under-recovery discount to OMCs on Profits

7. Impact of Discount on Retention Price of Crude Oil:

During FY'15, there is an increase in oil and gas production by 6.19% (Oil 0.86% and Gas 16.37%) as compared to previous fiscal year FY'14. The incremental production is primarily due to better management and addition in the portfolio from BC-10 ( Brazil), Sakhalin-I (Russia) and block A-1/A-3 in Myanmar.

Despite higher production during FY'15, the decrease in profit is mainly due to lower oil prices, higher financing cost including exchange loss, higher depletion charge, and impairment provision in one of the assets.

ONGC Videsh is currently producing about 182 thousand barrels of oil and oil equivalent gas per day and has total oil and gas reserves (2P) of about 612 MMtoe as on 31st March 2015.

This Press Release is intended to apprise the public regarding the highlights of Audited Financial Results of ONGC on standalone and consolidated basis, for the year ended 31st March, 2015 drawn up in accordance with Clause 41 of the Listing Agreement with stock exchanges and approved by the Board of Directors in their meeting held on 28.05.2014, in addition to informing about other major and / or related highlights/ developments which in view of the management may be considered as important. These are not to be taken as forward looking statements and may not be construed as guidance for future investment decisions by investors / stakeholders.