As London 2012 draws nearer, the heartbeats of more than a billion Indians will throb with immense hope and pride, and nervous energy as well. For at stake will be a chance to carve our name and establish our nation's sporting excellence at the biggest and the most prestigious sporting spectacle - The OLYMPICS. Our heroes who will be representing the nation at the OLYMPICS will carry with them our prayers and wishes, as they compete for the country's glory and global recognition. 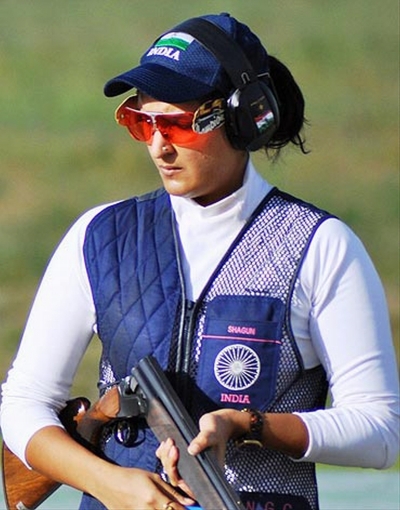 Shagun Chowdhary - a proud ONGCian and an 'OLYMPIAN' The prelude to this feature series enlightened readers about ONGC and its enduring connection with Sports, facts about 'The OLYMPICS' and Indians at OLYMPICS. With potentially as many as 15 ONGCians being a part of the Indian contingent, we thought it worth everyone's while that we bring to you the profiles of our 'own' sportspersons so that by the time the OLYMPICS are here, each one of us know a little bit more of our sporting heroes.

The tenth piece of this series profiles Shagun Chowdhary, an ONGCian who will be representing India in the discipline of Shooting.

Born in Jaipur, Shagun came across clay pigeon shooting for the first time in the year 1985 when she was just 2 yrs of age. She used to accompany her father Sushil Chowdhary, a skeet shooter himself, to the ranges with a toy gun. She got her first lesson in shooting by watching her father shoot with His Highness Maharaja Dr Karni Singhji of Bikaner. 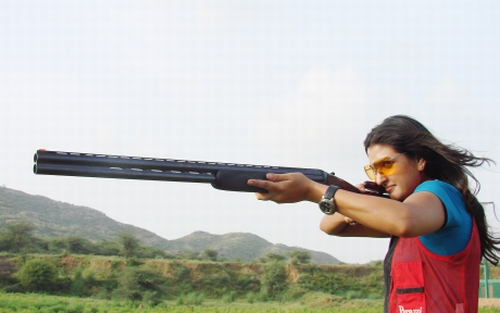 Shagun with her sights firmly set on 'The Olympics'

She started competitive shooting in 2001, but took it up seriously only in 2003. She won her first International medal in the Asian Clay Shooting Championship in 2003 when she won a bronze medal in the Double Trap event. She switched to trap in 2005 as double trap for women was scrapped from Olympics. Even though it was a completely different event for her, Shagun's fierce determination and perseverance helped her to become the National champion in Trap.

Shagun joined ONGC as a PRO in September 2008. She has been a consistent performer at National & International Championships. Her recent achievement has been a bronze medal at the team event in Trap at the ISSF World Cup in Chile in 2011. She currently trains under Italian coach Marcello Dradi. She says, "My conviction in myself makes me forge ahead and I aspire to win the Olympic Medal in the 2012 London Olympic Games". Her coach believes Shagun has a lot of potential and with right kind of training and support she can bring home an Olympic medal for India.

Shagun, one of the finest women shooters in the country, created history when she became the first Indian woman shooter ever to qualify for Olympics in the trap event. Shagun achieved this feat in 2011 when she won the quota for London Olympics by finishing fourth in the ISSF World Championship in Belgrade. She shot a brilliant 72 in the qualifying round which incidentally is also the National Record in Trap.

OR.net on behalf of every ONGCians wishes Shagun Chowdhary the very best of luck as she embarks on the journey to help India get an 'OLYMPICS' Medal in the Trap Shooting Event.