All smiles: The ONGC team after winning the championshipThe ONGC Basketball team stamped its authority in the basketball circuit once again in a short span of fortnight. Fresh from winning the prestigious PSPB Basketball championship few days ago, the team headed by Amit Kumar Singh – GC, continued its good run by winning the 28th Federation Cup Basketball Championship 2013-2014 defeating IOB in the finals by 61-53. ONGC team laced with International players was invincible and its opponents had no clue how to stop their aggression. Vishesh Bhriguvashi, by virtue of his stupendous show was declared Most Valuable Player of the Tournament. The Championship was on league cum knock out basis. ONGC was grouped in pool "A" along with IOB Chennai, BHEL Chattisgarh, Bhavnagar District Gujarat and N.F.Railway Guwahati. ONGC played its first match against N.F.Railway Guwahati in the pool and won the game with a score of 78-52. ONGC continued its good run throughout the tournament and remained undefeated to top the pool 'A'. Pool 'B' was topped by BSF Punjab who defeated the ARMY team to attain this position. ONGC played its Semifinal against ARMY and defeated them with a score line of 69-54. This was a crucial game in which Vishesh Bhriguvanshi, Trideep Rai and Yadwinder Singh created excellent moves and converted them into valuable points for the team. Vishesh scored 20 points, Trideep pitched in with 17 and Yadwinder contributed 11 points. 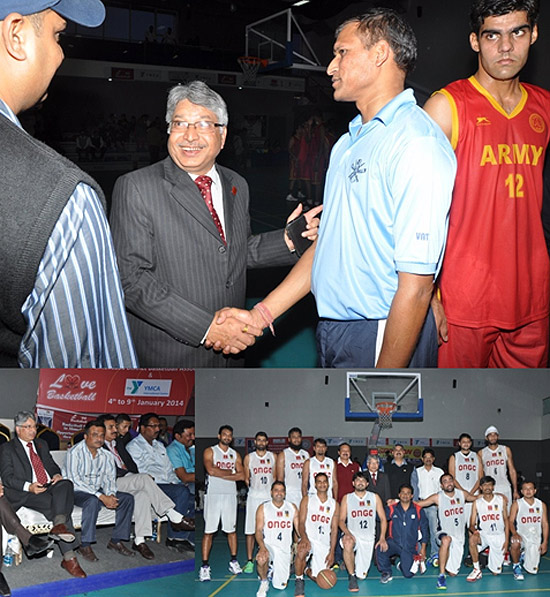 Mr J.G. Chaturvedi ED Asset Manager, ONGC Ahemdabad giving a pep-talk to playersMr. J.G. Chaturvedi ED Asset Manager, ONGC Ahemdabad was the chief guest at the Semi- finals and was quite elated at the team's victory. He personally congratulated all the team members. In the finals, ONGC team once again played like champions and defeated IOB with a difference of 8 points (61 – 53). Amritpal Singh scored useful 24 points and Vishesh contributed 12 points in this all important game. We are all proud of the champion team for winning the national title.