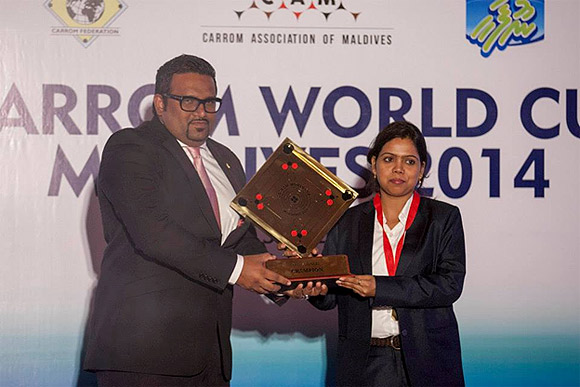 Rashmi Kumari with the World Cup at Maldives ONGCian Rashmi Kumari added the crown of titles – The Carrom World Cup, to her impressive kitty of wins. The current national and world champion cornered glory for India on Tuesday by winning Women’s Singles and Doubles titles and also helped Indian Team to win the Gold Medal in Team Championship at the 4th World Cup held at Maldives from September 13-18, 2014.

Rashmi defeated Kavita Somanchi of India in straight sets with the scores reading 25-17, 25-22. In the Doubles event, Rashmi paired with P Jayashree to beat Kajol and Kavita, also from India.

14 Countries comprising Canada, France, India, Italy, Japan, South Korea, Malaysia, Pakistan, Poland, Srilanka, Switzerland, United Kingdom and host Maldives participated in the tournament but the sheer class of Rashmi made them all look inferior against her as she decimated one opponent after another.

Rashmi has been performing outstandingly for the country and the company for nearly four years maintaining impeccably consistent form.