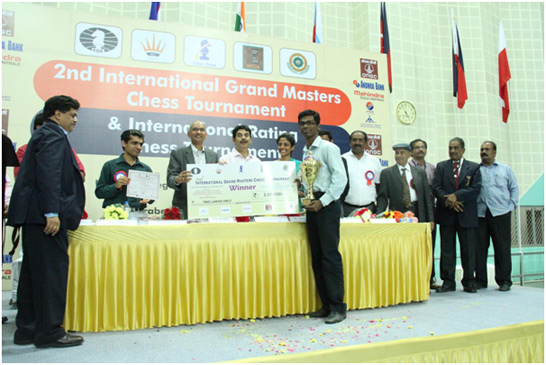 In the 11th and final round, Sethuraman drew against GM Merab Gagunashvili of Georgia to secure his title. This is the second major title this year after his remarkable win in Leiden Open during July for the Chennai-based former World Youth (Under 16 category) champion. As per the latest rating list, Sethuraman stands at No 13 in the senior ranking list but his brilliant win in Hyderabad International will take him within top 10 players of the country.

The Climax of the tournament's penultimate Round was on December 2, 2013. In the top board were two young Grandmasters of India, Sethuraman and fellow ONGCian Vidit Gujrathi fighting for the top prizes. Finally, Sethuraman managed to win the game though Vidit had blundered from an advantageous position.

Vidit on the other hand recovered from the penultimate round's setback and came back nicely to show his character, temperament and of course amazing talent to win an excellent game against another Georgian GM Tornike. Thus he too made it to podium finish (3rd place).

Earlier, speaking at the inaugural function, Mr Virendra Kumar Mahendru, GM (C)/Head Sports ONGC thanked the top management and sports fraternity of ONGC for their concerted efforts in raising the level of sports in the country. He spoke at length about the top National & International performances rendered by the ONGC sportspersons. He also congratulated the organisers for their tremendous work which saw 350 players from 14 countries.