ONGCian H S Prannoy finished runner up in the men’s singles at the Vietnam Grand Prix Gold Badminton event held at Ho Chi Minch.  Prannoy strived hard to sustain his scores but went down fighting to 1st seed Dionysius Hayom Rumbaka of Indonesia. The scores were 18-21, 21-15, 21-18. 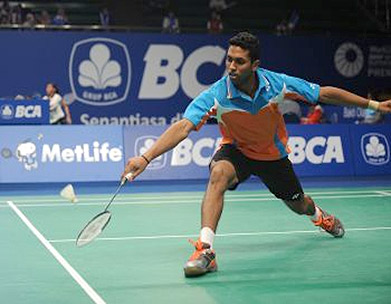 In a marathon encounter that lasted an hour and three minutes, Prannoy made remarkable comebacks in the match. After the first two games were shared between the two, Rumbaka took a massive 11-3 lead in the decider. The Indian, World No. 50, tried fighting back but the Indonesian had enough leeway to reach match-point (20-15). Prannoy saved three of the match points but the World No. 25 took advantage of his lead to seal the summit clash in his favour.

Prannoy has shown tremendous improvement during 2014 by winning Bronze Medal in Sri Lanka Open International Challenge tournament which was followed by winning All India Ranking Tournaments at Cochin & Pune. His current ranking of No 50 in the World is set to improve further with this Vietnam Grand Prix performance.