Hydrogen is a clean energy carrier. It is abundant on earth, but in combined form in several compounds, the most common being water. However, producing hydrogen from water by electrolysis, using electricity, is energy intensive. Therefore, it is imperative to research methods to generate hydrogen from water in an energy efficient manner. 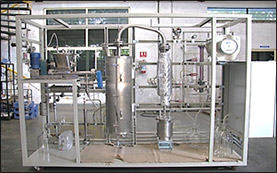 Hydrogen Generation Reactor at ICTOEC had started research on development of thermochemical processes for generation of hydrogen by splitting of water, utilizing high temperatures, which may be obtained from solar or nuclear sources as heat. From among various possible options, development of closed-loop Copper-Chlorine (Cu-Cl) and closed/open-loop Iodine-Sulfur (I-S) cycles have been taken up under this project. The highest temperatures required for these processes are 550°C and 900°C, respectively.

OEC has now successfully completed indigenous development of thermochemical processes for decomposition of water into hydrogen and oxygen. Several equipment required for Cu-Cl and I-S cycles have also been indigenously designed and developed. A Laboratory Scale Engineering Plant @ 25 LPH has been set up for Cu-Cl process in the campus of ICT, Mumbai. A total of three national, PCT and international (six countries) patents are filed, jointly by ICT and OEC. In addition, four national patents have been filed, jointly with IIT-Delhi, for the I-S cycle process.