Amit Kumar is the current star of Indian Wrestling. The 19 year old ONGCian from Sonipat in Haryana made India proud on Monday evening, winning the silver medal at the Papp Laszlo arena in Budapest in the 55Kg category of the World Wrestling Championship.

The Asian Championship (2013) Gold Medalist Amit Kumar lost 1-2 against the more experienced Iranian Hassan Farman Rahimi- in the finals. Amit was always in the fight and twice came close to pinning down his opponent in the second round but the Iranian managed to wriggle away. 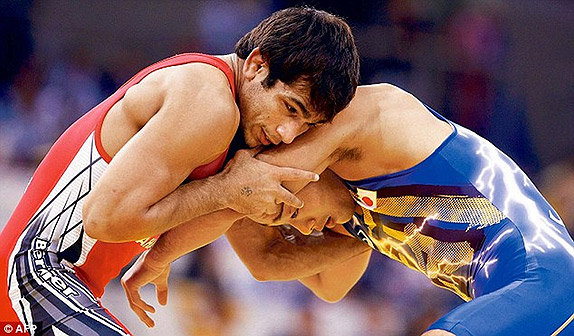 Gripping the hard way - Amit in action at the World Championship “There hasn’t been any testing bout till now. Let’s see how the semifinal match shapes up.” Amit said from Budapest after advancing to the semis.

The talented grappler opened his campaign against 2010 Moscow world Championship bronze medallist Japan’s Yasuhiro Inaba. Undeterred by his opponent’s past record, Amit outclassed the Japanese 10-2. His journey to the next round was no different. In the quarterfinal against USA’s Angel Alesm Escobedo, he triumphed again with ease & finally went on to win silver medal.

Amit was an Olympian at the age of 18 years when he qualified in London Olympics 2012 and performed creditably there. ONGC hopes to see him at the podium in the 2016 Olympics.

Great going by the young lad!