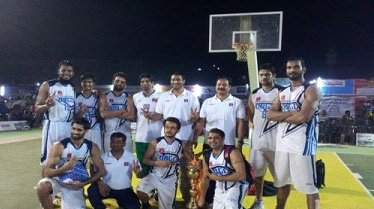 Flashing the victory smile with the Winner Trophy ONGC Basketball team has won the prestigious JCI All India Basketball Tournament held at kerala from January 9-13, 2013. Tournament saw participation of top teams of the country which was played on league cum knock out basis with the top two teams in the each pool qualifying for the semi-finals. Vijaya Bank Bangalore, KSEB Trivandrum, IOB Chennai were placed in pool 'B' while Cochin Custom, Kerala Police, and ONGC were placed in pool 'A'. ONGC won all the pool matches and topped the pool. In the semi-final ONGC beat Vijaya Bank Bangalore by 68-63. The final match was a keenly contested wherein ONGC team maintained the lead right from the first quate ONGC beat Indian overseas Bank by 20 points with a score of 78-57. Yadwinder Singh, Vishesh Bhriguvashi and Mohit Bhandari put up a class act in attack while Murali Krishna Anoop M Shabeer, Desraj and Dinesh were very good in defence against the opponents. Yadwinder Singh and Vishesh scored 25, 20 points while Mohit Bhandari contributed 18 points.