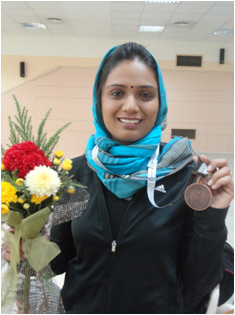 Ms.Chaudhry proudly displays the Bronze Medal Ms. Shweta Chaudhry has won Bronze Medal for India in the 10 Metre Air Pistol Women Event at the 6th Asian Air Gun Shooting Championship held at Tehran, Iran from October 18-25, 2013. The ace Indian shooter has been part of the Indian team for this event for sixth consecutive year.  Incidentally in the overall placings too, India secured bronze with a score of 1132 out of 1200. Hosts Iran won the Silver just five points ahead and China won Gold just eight points ahead of India. The event was a nail biting one as can be envisaged from the close finish score of the teams. This is the second consecutive year that India has secured the Bronze Medal at this event.

Ms. Shweta Chaudhry’s medal winning effort is commendable considering that it was in spite of the hindrance and challenge posed by stringent dress code on women in Iran which greatly curtails the mobility of shooters firing arm as well as proper seating of ear plugs.  The women’s team is generally given extra training time prior to the event to acclimatise themselves to the attire which they compulsorily have to wear at all times while participating in countries like Iran.