In the 33rd Inter unit PSPB Table Tennis Championships held at Coimbatore from July 31 to August 4, 2013 organized by HPCL, ONGC stood apart by netting a whopping total of 20 points. 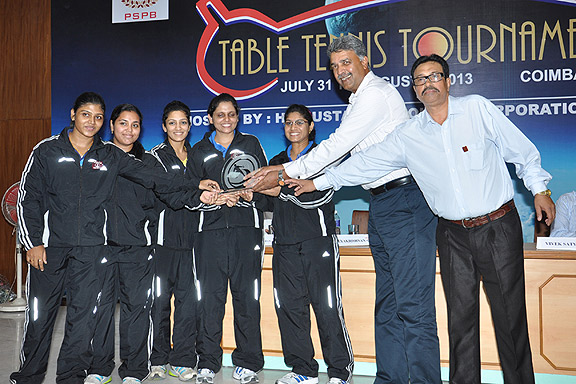 All smiles: The title winning women team of ONGC The ONGC Women's team created history by securing Gold in the Women's team section after a gap of 11 years. They ousted the top seed IOC 3-1 in the finals. Divya Deshpande gave ONGC the start it just needed by beating the in-form Manika Batra in four games to put ONGC in the lead 1-0. In the second tie, current national champion K.Shamini of IOC leveled the scores 1-1 by beating Madhurika Patkar.

Mousomi Paul pulled off the crucial third tie for ONGC by beating Reeth Rishiya and made it 2-1 in favour of ONGC. Finally, Captain Madhurika Patkar displayed tremendous skills on the table and finished the proceedings for ONGC by beating Manika Batra and ensured Gold for her team. The team spirit shown during the match has to be definitely applauded.

A special mention should be made about Madhurika Patkar who continued her great form as she went on to win the Women's singles title by beating Arjuna Awardee Poulomi Ghatak (BPCL) in the final hurdle. She took a sweet revenge for her loss in team events as she thrashed current national champion K.Shamini in straight sets in the penultimate round.

ONGCians made a clean sweep by clinching Gold in the Women's Doubles event. Madhurika partnering Pooja Sahasrabudhe beat own teammates Mousomi Paul and Soumi Mondal in the finals.

Amalraj paired up with Jubin Kumar to clinch the Men's Doubles Gold by winning against the top seed pair of Sanil Shetty and Soumyajit Ghosh of BPCL 3- 2 .

The ONGC Men's team won the Silver in the team event. They lost to IOC 1-3 in the finals where IOC's Sharath Kamal lead from the front by winning both his matches and got a helping hand from team-mate Sourav Chakraborthy who won the crucial third tie. Amalraj won the sole match for ONGC against Soumyadeep Roy.

In the Men's singles event, Amalraj disposed off Sanil shetty in straight sets in the quarterfinal stage.  Jubin Kumar won the bronze medal as he went down fighting 3-4 to his team mate Amalraj. Their match was definitely a treat to watch for the sport lovers. Amalraj had to settle for silver as he lost to Soumyajit Ghosh 1-4 in the final hurdle.

The Veteran ONGC team also won the Ssilver in the team event. 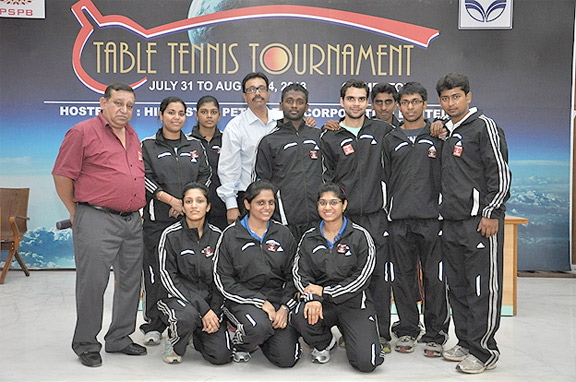 Overall, ONGC put up a great show in the tournament by securing a total of 9 medals comprising of 4 Gold, 4 Silver and 1 Bronze. Mr I P Borthakur GC (TT) was all smiles on this stupendous achievement of Team ONGC. Speaking to ONGC Reports, he said "Winning this tournament is the result of team-work and support and motivation extended by Head Sports".