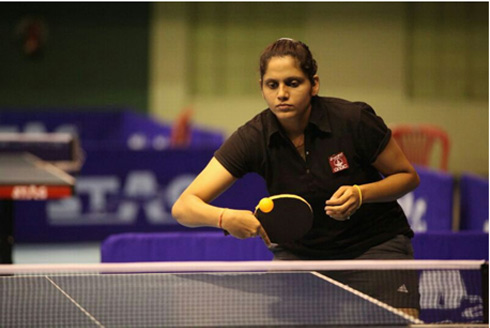 Pooja in action during West Zone National Ranking Tournament Pooja Sahasrabudhe claimed the title at the Thane National Ranking Table Tennis Tournament.  In an exciting all ONGC final, Pooja beat fancied Madhurika Patkar 4 games to 3. Earlier in the Semi Final, she defeated K.Shamini in an identical score line of 4-3.

A.Amalraj and Madhurika Patkar clinched the men's & women's titles respectively at the East Zone National Ranking Tournament held at Siliguri (North Bengal) from Oct 24-19, 2013 while Pooja Sahasrabudhe went down fighting in the semi-final.

Meanwhile in the women's category Madhurika Patkar, the no 5 seed, breezed past Mouma Das in straight sets (11-7, 11-2, 11-4, 11-7). Patkar wrapped up the match in 20 minutes and during a post-match interview had this to say, "I am very happy today, Mouma is a far more experienced player & winning against her always requires extra energy, different strategy and hard work because she never gives up.  Usually our match stretches to 7 games, but today winning against her so easily is unbelievable."

Deshpande caused a few upsets enroute to the semi-final and the highlight of them being the win over top seeded K.Shamini in the quarter-final while the other was against the no 8 seed & fellow team mate Mousumi Paul. The win against Shamini proved Deshpande's grit as she came back from 1-3 behind and kept fighting till the last point and ultimately won the match.

Congrats to all players and GC-Table Tennis Borthakur on this remarkable feat.