The champion Ms Rashmi in action ONGCians Ms.Rashmi Kumari and Ms.S.Ilavazhaki cornered glory for the nation and the company at the international Champion of Champion Carrom Tournament. The tournament was held at Gurgaon from October 21-23, 2013. Ten countries comprising Sri Lanka, Maldives, Malaysia, US, UK, Poland, Germany, Canada, Korea and hosts India participated in the tournament. Each country fielded a team comprising four members in the composition of two men and two women players. India was represented by Mr.Yogesh Pardesi & Mr.K.Srinivas, both from IOC while both women members Ms.Rashmi Kumari & Ms.S.Ilavazhaki were ONGCians. 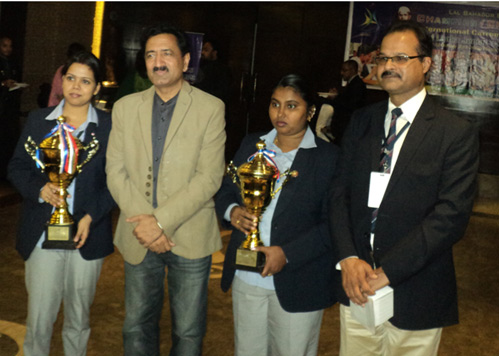 CSD congratulates the players and GC-Carrom on the remarkable performance.