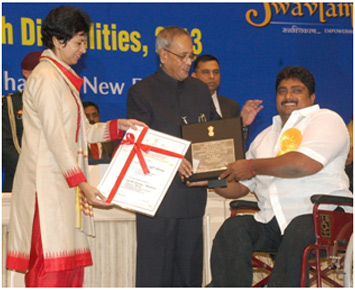 Para Aathlete J. Ranjith Kumar on scholarship with ONGC was honoured with the “Best Sportsperson with Disabilities” award by President of India Mr Pranab Mukherjee in a befitting function in the capital on December 3, 2013. This National Award is conferred by the Ministry of Social Justice & Empowerment – Department of Disability Affairs to outstanding performers with disabilities. Mr Kumar of Madurai, Tamil Nadu, is the first person to receive this award in recognition of achievements in sports. The ONGCian was selected among 495 contestants for the prestigious award for his outstanding achievement of 18 international appearances for India over the last 13 years (since the year 2000) which includes a haul of 9 Gold medals, 8 Silver medals and 6 Bronze medals in the events of shot put, discus & javelin throw. Mr.Kumar has represented India in 2 Para Asian Games - first in the year 2002 at South Korea and in 2006 at Malaysia. He was also a member of the Indian contingent for the Commonwealth Games at Australia in 2002. At the National level too Mr Kumar’s performance is spell binding with 36 Gold medals and undisputed National Champion title for 13 consecutive years since 2000. In February 2013 at the 7th Open National Games in Chennai, he had won the Gold medal in Discus Throw event and subsequently in March 2013 went on to win the Gold Medal at the 14th National Athletic Championships in Bengaluru in Shot put & Discus Throw events. In his communication to CSD, he thanked ONGC for its backing and dedicated the award to it for the much needed support it got from the company. CSD congratulates Mr Kumar on winning the National Award and donning the Indian tri colour, bringing home glory to our nation.