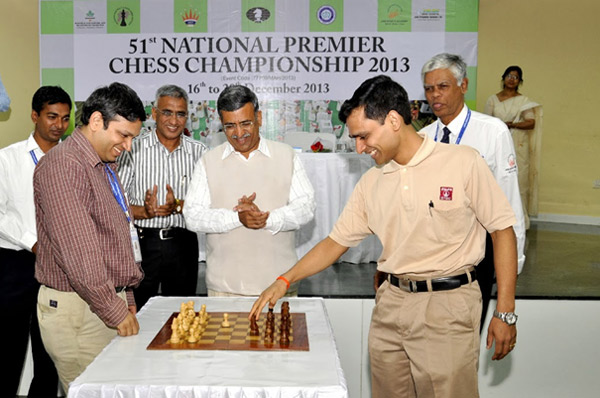 A game being flagged off: Sasikaran (right) making his opening move The 51st National Premier Chess Championship 2013 was held at Jalgaon, Maharashtra from December 16-30, 2013. It was a 14 player all play all round robin system. ONGCian K Sasikiran started as the 2nd seed behind GM Parimarjan Negi (BPCL).

Sasikiran had a good start with 6.5 points out of 7 rounds, sharing the lead with GM Lalith Babu (IOC). Lalith Babu's unexpected loss in the 8th round against IM Akshat Khamparia (Railways), allowed Sasikiran to lead the tournament with 7 points, after a draw with GM Deepan Chakravarthy of Tamil Nadu.

Sasikiran had a minor setback after his loss against GM B Adhiban (IOC) in round 9. However in the very next game, he bounced back with a victory against overnight leader Lalith Babu, after which he never let go of the lead and emerged victorious with back to back wins in the penultimate and last round to end the tournament with the final score of 10.5 / 13, claiming clear first place ahead of Adhiban by half a point.

Sasikiran thus secures his spot in the Indian team for the forthcoming Asian Nations Chess Cup, World Chess Olympiad and Asian Games which are to be held in the year 2014.