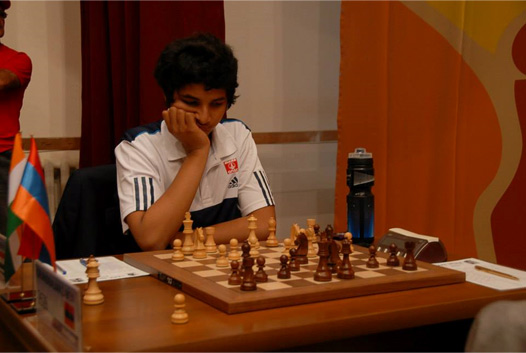 Grandmaster Vidit Gujrathi in action at Lake Sevan Grandmasters Chess Tournament 2014ONGC's latest Chess recruit Grandmaster Vidit Gujrathi started his tenure in ONGC with a bang, winning the strong Lake Sevan Grandmasters Chess Tournament held at Armenia from 24th July to 4th August 2014. Starting as 7th seed in the 10 player all-play-all (Round-Robin) event, Vidit proved to be the most consistent player scoring 6 points from 9 games with 3 wins & 6 draws. This annual invitational event organised by Chess Academy of Armenia features 10 young Grandmasters every year. This year Vidit was the only non-Soviet player in field which had 5 Armenians and 2 players each from Russia & Ukraine.

Vidit, who was under ONGC sports scholarship over the last few years, joined the Organisation as AG-I (P&A) at Rajahmundry only on July 22, 2014 and started immediately for this event. The 19 year old from Nashik, who won the Bronze medal in World Junior Championship last year, recently broke through the 2600 barrier in ELO Rating and can now look forward to the next target of ELO 2700+.