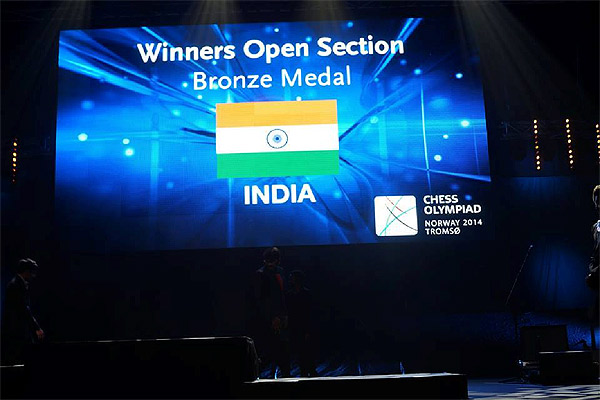 A proud moment for IndiaIndian Men Team comprising mainly of ONGC & other Petroleum Sector players won Bronze Medal in the recently concluded Chess Olympiad at Tromso, Norway (August 1-14, 2014). This is the first ever team medal for India in the 90 years of Chess Olympiad history.

Lead by ONGCian Grandmaster Krishnan Sasikiran, the team featured Grandmasters S.P.Sethuraman (ONGC), Parimarjan Negi (BPCL), B.Adhiban & M.R. Lalith Babu (both IOC). Sasikiran also won Silver Medal for his stellar performance in the 3rd board, while  Sethuraman crossed a personal milestone of 2600 in ELO Rating through his strong show in the event. Handicapped by the absence of top 2 players of the country (V Anand ans P Harikrishna) and starting as 19th seed in the tournament, the young team put up an inspired show to power their way past several fancied teams to the podium finish.

(Pic - Left) Victorious Indian Men's team. From L to R: Grandmasters Parimarjan Negi (BPCL), R.B.Ramesh (Coach), K.Sasikiran (ONGC), B.Adhiban (IOC), S.P.Sethuraman (ONGC), M.R. Lalith Babu (IOC) (Pic - Right) Indian Team at the start of the game against Defending Champions & 2nd Seed Armenia. The match ended in a draw (2-2)Though Chess is not part of Olympics, the biennial Chess Olympiad is one of the largest sporting events on earth and features almost every top player in the world. The current edition of the Olympiad featured teams from 177 countries! China and Hungary won the Gold & Silver medals, while fancied teams from the Soviet blocs finished behind, despite fielding their best teams comprising of the world elite! In the women section Russia won the Gold, while India finished 10th, but got an individual gold medal for 5th board performance by WGM Padmini Rout.