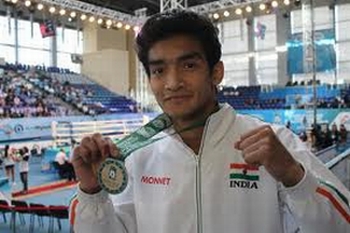 Shiva Thapa - a proud ONGCian and an 'OLYMPIAN' As London 2012 draws nearer, the heartbeats of more than a billion Indians will throb with immense hope and pride, and nervous energy as well. For at stake will be a chance to carve our name and establish our nation's sporting excellence at the biggest and the most prestigious sporting spectacle - The OLYMPICS. Our heroes who will be representing the nation at the OLYMPICS will carry with them our prayers and wishes, as they compete for the country's glory and global recognition.

The fifth piece of this series profiles Shiva Thapa, an ONGCianwho will be representing India in the discipline of Boxing.

Doing what he does best... knocking out opponents in the ring

A boxer of immense potential Shiva Thapa is from Guwahati, Assam. He was born as the youngest of six siblings to Padam Thapa, a karate instructor in Guwahati on December 8, 1993. His father and his elder brother Gobind Thapa, an Assam state-level medal winning boxer, were sources of inspiration for the young Thapa. Mike Tyson's bouts also inspired him to take the sport seriously. Padam noticed his son's flair for boxing and made sure that his youngest son got all that he needed to be a successful boxer. Shiva rose early in the mornings to balance his training and studies. His practice first started in the living room of their house at the age of seven. He admits that without the support of ONGC, first in the form of scholarship and then by employment, it would not have been possible for him to make it to the top level.

Shiva is the youngest Indian Boxer to Qualify for Olympics. At the 2008 Children of Asia International Sports Games that was held in Moscow, Shiva won a bronze medal in his category. At the same year's Haider Aliyev Cup, he won the gold medal. Owing to this performance, he was chosen to represent India in the 52-kg category at the 2009 Junior World Boxing Championships in Armenia. Incidentally, Thapa was the lone international medallist from the team of seven boxers that travelled to Yerevan. Though he ended up with a bronze medal, the coach expressed his satisfaction at the boxers' performance who returned with their biggest haul of medals from this competition.

OR.net on behalf of every ONGCians wish Shiva Thapa the very best of luck as he embarks on the journey to bring home more glory and an OLYMPICS medal in Boxing.