As London 2012 draws nearer, the heartbeats of more than a billion Indians will throb with immense hope and pride, and nervous energy as well. For at stake will be a chance to carve our name and establish our nation's sporting excellence at the biggest and the most prestigious sporting spectacle - The OLYMPICS.Our heroes who will be representing the nation at the OLYMPICS will carry with them our prayers and wishes, as they compete for the country's glory and global recognition.

The prelude to this feature series enlightened readers about ONGC and its enduring connection with Sports, facts about 'The OLYMPICS' and Indians at OLYMPICS. With potentially as many as 15 ONGCians being a part of the Indian contingent, we thought it worth everyone's while that we bring to you the profiles of our 'own' sportspersons so that by the time the OLYMPICS are here, each one of us know a little bit more of our sporting heroes.The fourth piece of this series profiles Valiyaveetil Diju, an ONGCian who will be representing India in the discipline of Badminton.

Valiyaveetil Diju or V. Diju has been in the Badminton circuit for a reasonably long time and has performed exceedingly well at National and International circuit in mixed doubles (along with Ms. Jwala Gutta). Born on June 4, 1981, Diju joined ONGC on 31.12.2003, and all along has scaled many highs in his Badminton career.

His hobbies are watching movies and football matches.

Some of his Key achievements are:​ 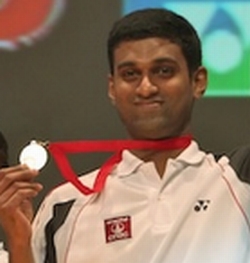 V Diju in action on the Badminton Court

He has qualified for London Olympic 2012 in Mixed Doubles (along with Ms. Jwala Gutta).

OR.net on behalf of every ONGCians wish Valiyaveetil Diju the very best of luck as she embarks on the journey to bring home the prized OLYMPICS medal in Badminton.