ONGC - Badminton - Back to back titles for ONGCian Sourabh Verma 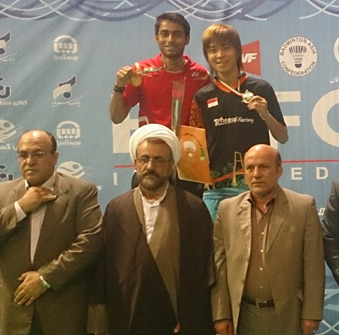 Sourabh Verma (in red T-Shirt) on the podium

The 23 year old Sourabh who first won Tata International Challenge in Mumbai in December 2013 and followed it up by winning Iran & Austrian International challenge tournaments. Back to back titles will surely help improve his ranking & boost his confidence.

In Iran International, he beat Tzu Wai Wang (Chinese Tapei) in semi-finals and Dhrama Alrei Guna (Indonesia) in the finals (21-13, 21-11).

In a nail biting finals of Austrian International, Sourabh outsmarted Andre Kurniawan Tedjono of Indonesia 21-11, 21-23, 21-18 to clinch the title. Former National Champion sourabh ranked 41 in the world was kept on court by the eighth seeded Indonesian, once No 18 in the world, for 69 minutes.