Vikas Gowda (GOLD in Discus Throw) and Om Prakash Singh (BRONZE Shot put)ONGC athletes contributed almost fifty per cent of the Medal tally for India in the 20th Asian Athletic Championship held from July 3-7, 2013 at Pune (India). Once again ONGCians emerged victorious for the Country by winning 8 Medals out of 17 won by the Indian team. Moreover, both the two Gold Medallist from India are ONGCians. China topped the table by winning 16 Gold, 6 Silver and 5 Bronze while India got 6th position on the table by Winning 2 Gold, 6 Silver and 9 Bronze Medals. Out of 110 athletes who participated from India, 18 were from ONGC. The star attractions of the Championship from Indian side were ONGCian Vikas Gowda who won Gold Medal in Men Discus Throw and M R Poovamma who won Gold in Women 4x400 mtrs relay as well as Silver in Women 400 mtrs Race. Other notable achievements came in from Arpinder Singh, Mayookha Johny, Om Prakash Singh, Samarjit Singh and Dutee Chand, they all won Bronze Medals in their Events. Mr J.S. Waraich, GC – Athletics who recently took over as Secretary General, All India Public Sector Sports Promotion Board said that in the coming Asian Games in 2014 and Olympics in 2016, it is almost certain that ONGC athletes will dominate total Indian Athletics Scenario. He was speaking at Medal ceremony of the Athletic Championship. 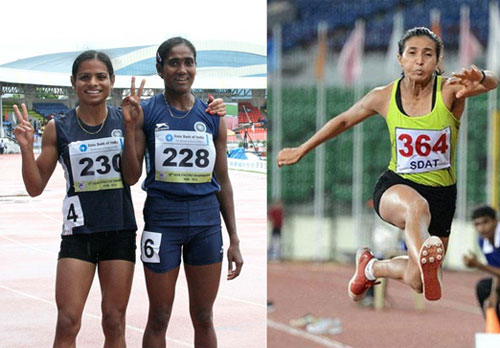