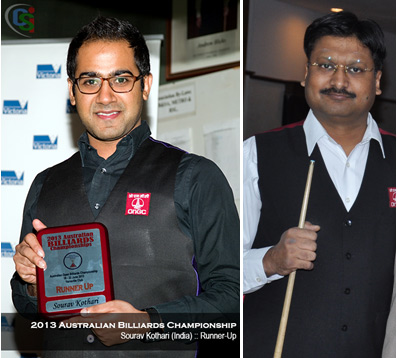 Sourav, whose participation in this stellar event was funded by ONGC, did the entire nation proud and won many accolades from the media as well as the cue sports fraternity for his perseverance and determination in reaching the final and playing on the table for a record 14 hours nonstop on the penultimate day of the championship with World No. 1 Matthew Bolton snatching a narrow 5-3 games victory over Kothari.

By virtue of this performance, Sourav's ranking in the World Billiards Order of Merit list for the 2012-13 season has jumped to Number 8 and put him in a considerably good place to directly qualify for the 2013 World Billiards Championship to be held later this year.

Being given just a half an hour break before getting back to the table to start the final, Kothari impressed one and all with his resilience and battled fatigue in the most impeccable manner to take a whopping lead of 3-0 games in the FINAL but eventually lost 5-3 games courtesy a spirited comeback by World No. 1 Matthew Bolton of Australia.

Alok Kumar yet again lived up to the honor of being one of India's greatest all-rounder by reaching the semifinals of the event just a few days after having won the GOLD medal in the Asian Snooker Team Championships in Doha, Qatar.

Not having lost a single game in the league stage, Alok defeated Dhvaj Haria of India in the knock out last-16 followed by a 4-1 games demolition of Steve Mifsud of Australia in the Quarter Finals.

In the semis, Alok put up a spirited fight against Matthew Bolton before bowing down by 5-2 games.

This event has set the stage for the last 'ranking event' of the year - The America's Cup, a Major Triple Ranking Points World Ranking Event being held for the first time in Canada in August, 2013.