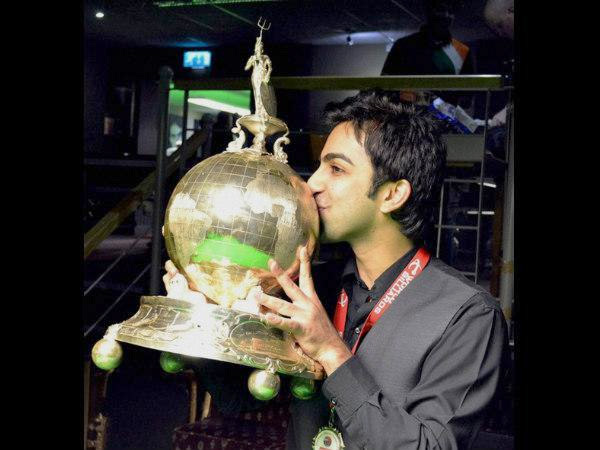 Pankaj Advani with the TrophyIndia's most celebrated cueist Pankaj Advani clinched both the World Billiards Championships (time format & point format) to bag a record 12th world crown and also complete a rare 'Grand Double' post his third win in both the long and short formats in the same year.

An ONGCian, Advani set the green baize on fire as he humbled England's rising star Robert Hall 1928-893 in a one-sided contest to hand his mother, a perfect birthday gift on Wednesday. He had won the 150-up format last week after defeating Peter Gilchrist.

Hall, who had got past Advani's citymate Balachandra Bhaskar in the semi-finals, could not stand up to the Indian ace and the Englishman's maiden final appearance ended on a disappointing note.

But it was all smiles for Advani, whose third grand double makes him the only billiards player in the World to achieve this feat. Advani, 29, surpassed Mike Russell, who had won the double in 2010 and 2011.

Advani's previous grand doubles were in Malta in 2005 and in his hometown in 2008.

Saving his best for the last, which is often synonymous with Advani, he led 746-485 with the help of a 185 break in the first session of the five-hour final

On resumption, the Indian ace fired in breaks of 94, 182, 289 and 145, adding a whopping 1000 points in under two hours. Advani then went into overdrive making the match a foregone conclusion with over hour left on the clock.

On winning his 12th world title on his mother's birthday, he said, "This win is truly special. Apart from the dozen world titles and the third grand double, the main reason for it being so special is because it was won on my mother's birthday. She is my rock. Happy birthday Mom! Hope you like".

On behalf of all the ONGCians, Corporate Sports Division congratulates Pankaj  for creating  history in World Billiards Championship.