Uranium can be extracted by open surface mining, commonly in practice in India, or by In-Situ Leaching (ISL) from sub-surface, as practiced in some countries like USA, Australia, and Kazakhstan etc. At present, ISL process for Uranium extraction has not been fully developed and demonstrated as yet in the country.

In view of the advantages of the ISL method for Uranium recovery from sub-surface, OEC has taken up research for exploration of sub-surface Uranium which could be amenable for extraction through in-situ leaching (ISL). The initial analysis of the well log data of oil wells drilled by ONGC is being done by OEC to identify possible areas suitable for detailed analysis, modeling and experimental validation. This is followed by building geological models, using geo-scientific methods for validation of model/prospects by drilling, coring and electro-logging; geo-chemical and petro-physical analysis of cores, in order to assess the resource potential and its suitability for ISL process, at any specific region. These experiments are being used to develop a model to carry out In-Situ Leaching process development and its experimental validation. OEC has set up laboratory facilities at Ahmedabad for initial testing, characterization and modeling for both exploration work and ISL process development. The OEC laboratory for Uranium is located in a separate building in ONGC Complex, Ahmedabad.

Drilling for Sub-Surface Uranium Exploration Drilling, coring and logging are being conducted at project sites, for detecting and analyzing Uranium presence. This involves postulating the sub-surface Uranium mineralization model, followed by taking multiple geo-scientific inputs including rock modeling based on seismic data, remote sensing data on palaeo channels, geo-chemical maps, radiometric data, etc., for deciding locations, and drilling of boreholes for core retrieval and electro-logging. The data generated from actual drilling is used to review and tune the sub-surface Uranium mineralization model to optimize drilling efforts. Studies, carried out so far, have helped in identification of some potential areas with significant presence of Uranium. 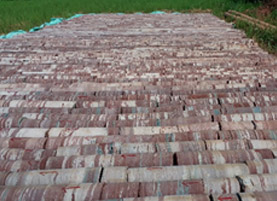 Sample of Cores Drilled by OEC As outcome of these activities, five regions have been identified so far by drilling 126 boreholes with appreciable Uranium presence. Extensive work is in progress to detect the presence of Uranium and conduct field experiments to demonstrate the ISL process.

A MoU has been signed between OEC and Atomic Minerals Directorate for Exploration & Research (AMD), Hyderabad, Department of Atomic Energy to work on Exploration of Uranium and chemical, physical, radiological and other studies to establish presence of Uranium, amenable to exploitation by ISL method.