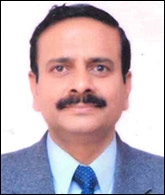 Ranjan Prakash Thakur joined as Chief Vigilance Officer (CVO) of ONGC on 29 April 2022. Prior to this, Mr Thakur has served as the Principal Secretary for Industry, Commerce and Aviation, Government of Jammu & Kashmir from 2021-22 and as an Executive Director (Fuel Transportation), NTPC, in 2021.

Mr Thakur is a graduate from St. Stephen’s College, University of Delhi. He is an alumnus of IIM, Indore, and has also obtained a degree in Executive MBA from the Indian Institute of Foreign Trade (IIFT). He has acquired a Diploma in Multi-Modal Transport from Germany.

Mr Thakur has worked in various capacities at the Division and Zonal Railway Units of Indian Railways. He served as Director/Passenger Marketing and Director Coordination in the Ministry of Railways from 2002-2007. He was also a Private Secretary to the Minister of Tourism & Culture and Information & Broadcasting from 2007-2012 after which he joined Doordarshan as Addl. Director-General from 2012-14.

From 2015-17, Mr Thakur was the Executive Director of the Ministry of Railways. He was then placed as Divisional Rail Manager, Patna/Danapur from 2017-2020 and Chief Safety Officer in 2020.